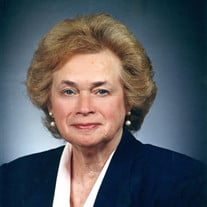 Mary Ann Bunting, 83, of Traverse City, went to be with her Lord and Savior on January 4, 2021 while her daughter held her hand. Mary was born on March 9, 1937 in Kalamazoo, MI, to the late Delno and Gertrude Henshaw and raised in a home abound in faith, respect, love, and hard work. She graduated from Kalamazoo Central High School in 1955 and Western Michigan University in 1959 with a Bachelor of Science degree in Education. At age 18, Mary began working at J C Penney. It was there she became smitten with a sophisticated, striking associate by the name of Keith J. Bunting. Mary and Keith were married on June 21, 1957 in Kalamazoo and moved to Midland, MI in 1967 where they lovingly raised three daughters and later became in-laws to three incredible sons. Mary taught kindergarten in Midland for nearly 25 years and earned her Master’s Degree in Education from Central Michigan University in 1971. She was a devoted member of the Presbyterian Church, the Lydia Circle, and the Association of Retired Teachers. Weekends and summers were spent at the cottage on Chandler Lake in Traverse City and in 1993, Mary and Keith built their retirement home on the same property. Her grandchildren’s favorite memories include picking cherries, attending the Cherry Royale parade, riding on the pontoon boat, and going to lunch with her. Among Mary’s many talents were her ability to play the piano and bake a succulent beef roast. She always had a cake cooling on the counter and a pan of Rice Krispies Treats ready to eat when family arrived for a visit. Mary adored her family and is survived by daughters: Susan (Jeffrey) Newland, of Traverse City, Lisa (Edgar) Anders of Mount Dora, Florida, and Lori (Patrick) Leddy of Nashville, Tennessee; grandchildren Alexandra Anders, Allison (Joshua) Singer, Michael Leddy, John (Lauren) Newland, and James Newland; great grandchildren, Sloane Ann Marie and Sterling James Singer, and Jay Callen Newland; sister-in-law, Kay Decker and many cherished nieces and nephews. In her later years, Mary valiantly cared for her husband after he was diagnosed with Alzheimer’s disease. She herself suffered many physical set-backs due to osteoporosis but, as always, her unshakeable faith in the Lord was a wonderful example to her family. In a recent Christmas card to her great grandchildren, she wrote out the lyrics to “Jesus Loves Me” and asked her granddaughter to sing it to them. She was an elegant woman and true humble servant of the Lord. Mary was preceded in death by her husband, parents, and brother, David Henshaw. Her family would like to thank all the staff and residents at Bay Ridge who embraced Mary and acknowledged what a wonderful person she was. A private memorial service will be planned at a later date. In lieu of flowers, the family asks that memorial contributions be directed to the American Diabetes Association P.O. Box 7023, Merrifield, VA, 22116-7023 or the Alzheimer’s Association (Research), Michigan Great Lakes Chapter, 564 S. Main St., Suite 200, Ann Arbor, MI 48104. Please share your memories, stories and thoughts of Mary with her family by way of her online guestbook at www.reynolds-jonkhoff.com.

Mary Ann Bunting, 83, of Traverse City, went to be with her Lord and Savior on January 4, 2021 while her daughter held her hand. Mary was born on March 9, 1937 in Kalamazoo, MI, to the late Delno and Gertrude Henshaw and raised in a home abound... View Obituary & Service Information

The family of Mary Ann Bunting created this Life Tributes page to make it easy to share your memories.

Mary Ann Bunting, 83, of Traverse City, went to be with her Lord...