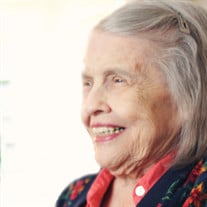 Mary Patricia (East) Corcoran,95, passed away peacefully on October 23, 2020 in the company of her family. She was born May 28, 1925 in Windsor, Ontario to Cyril F. and Sarah (Peggy) East and was raised in Detroit. Mary was a graduate of St. Theresa’s High School and attended the University of Detroit. In 1943, her father introduced her to the son of a business associate at a holiday party. This led to her eventual marriage to John F. Corcoran (Jack) on May 29, 1948. Jack and Mary settled into married life in Detroit. Mary was a homemaker and mother of six. Her greatest joy was raising her children. She kept a warm and welcoming home filled with laughter and the smell of something good cooking in the kitchen. Mary was a great listener and had a quick wit. She enjoyed volunteering her time- working in literacy projects with children in the inner city, as Girl Scout Troop Leader, carpooling, anything involving spending time with children. She enjoyed cooking and was a fabulous hostess to family and friends. The family moved to Traverse City in 1970. While she was sad to leave her extended family behind, she quickly fell in love with northern Michigan. Here she continued to fill her time and heart with volunteer work- with children at the Arnold Engstrom school, Munson Medical Center Escorts and her children’s school activities. She took an administrative assistant position with the Probate Court Volunteer Services and later worked for Myers Printing Service. Mary was predeceased by her parents; husband; her siblings John East, Sally Hungerman and Betty Hardy; sons John, James and Thomas Corcoran. Surviving are her son Michael Corcoran of Traverse City; daughters Patricia (Brian Lemcke) Corcoran of Sequim, Washington and Margaret (Scott) Brown of Traverse City; daughter-in-law Connie Corcoran; five grandchildren, Molly Wilson of Haines, Alaska, Christopher Wilson of Fraser, Michigan, Brenna (Rory) O’Donnell of Quincy, Illinois, Evan and Kiernan Brown of Traverse City. Also surviving her are great-grandchildren Rory and Scarlett O’Donnell; several “favorite” nieces and nephews, and very dear friend Arlene Clarke. Per Mary’s wishes, there will be no services. An interment ceremony will take place at a later date in Laingsburg, Michigan. Those wishing to make a donation in her honor are asked to skip it, and instead do something nice for someone else. The family would like to thank the staff of French Manor South for their loving and compassionate care, as well as Hospice of Michigan. If you wish to share a memory or condolence on Mary’s tribute page, visit www.reynolds-jonkhoff.com

Mary Patricia (East) Corcoran,95, passed away peacefully on October 23, 2020 in the company of her family. She was born May 28, 1925 in Windsor, Ontario to Cyril F. and Sarah (Peggy) East and was raised in Detroit. Mary was a graduate of St.... View Obituary & Service Information

The family of Mary P. Corcoran created this Life Tributes page to make it easy to share your memories.