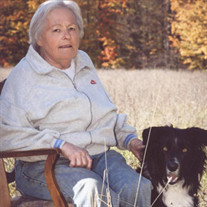 A Celebration of Life will be held at 1:00 pm Tuesday, June 16, 2020, with visitation one hour prior at the Northwestern Michigan Fairgrounds. This is an outdoor event to allow for social distancing. Mary Orleta Dennis, age 85, of Maple City, Michigan, passed away peacefully in her own bed on Thursday, June 11, 2020. Mary was born July 7, 1934 in Coopersville, Michigan to Kenneth and Mary Park. She was preceded in death by her parents, her sister, Lynneth Kohlbeck and her beloved dog, Sir Bobby. She is survived by her three children Keith (Liz) Dennis of Waynesboro, Virginia; Jackie (Bob) Engel of Muskegon, Michigan; and Val Eimers of Maple City. She is also survived by four grandsons whom she loved very much: Chris (Cassie) Dennis of Navarre, Florida; Jake (Cory) Dennis of Odenton, Maryland; Jeff (Alison) Bauter Engel of Chicago, Illinois; and Collin (Sara Radiske) Eimers of Maple City; and one great grandson Landon Eimers. She is also survived by four nieces and nephews. Mary grew up in Coopersville, Michigan, where as a teenager she ran a riding stable and gave lessons and led trail rides. After marriage, she moved to Leelanau County and had lived in the same house since 1961. Just a few days ago, she sat on a bench and contentedly gazed over her barn and 40 acres which she had named “Mary’s Gone Broke Hobby Farm”. Mary raised her kids on home-grown and home-canned vegetables and farm-raised chicken, pork and beef. There were always horses, sheep, pigs and dogs on the place. Mary was still an active director on the board of the Northwestern Michigan Fair, a position she first held in the 1990s. Mary was known for her years of service to Glen Lake Community Schools. She drove bus for over 30 years, retiring in 1997. She ran the concession stand for 25 years and she sold tickets at athletic events for 54 years, up until the last sporting event held in March. For a lasting memorial please consider the Mary Dennis Community Service Award at Glen Lake Community Schools, 3375 W Burdickville Rd, Maple City, MI 49664 or the Northwestern Michigan Fair, 3606 Blair Township Road, Traverse City, MI for improvements to the museum. Share a memory with Mary’s family at www.reynolds-jonkhoff.com Mary and her family are in the care of the Reynolds-Jonkhoff Funeral Home and Cremation Services.

A Celebration of Life will be held at 1:00 pm Tuesday, June 16, 2020, with visitation one hour prior at the Northwestern Michigan Fairgrounds. This is an outdoor event to allow for social distancing. Mary Orleta Dennis, age 85, of Maple City,... View Obituary & Service Information

The family of Mary Orleta Dennis created this Life Tributes page to make it easy to share your memories.