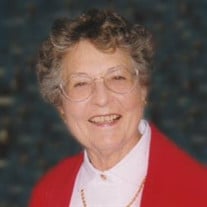 Mary Blanchard Doerr, loving wife, mother, grandmother, great-grandmother, aunt and friend died peacefully on February 9 at Cherry Hill Haven. Gracious to the end, she fought a long battle with Alzheimer’s disease and is now reunited with “her Bob”, her late husband of almost 69 years. Robert E. Doerr, who died in September, 2014. Mary, who was born on April 25, 1922 in Aberdeen, SD. was the only daughter of the late William C. and Blanche Coleman Blanchard. She came with her parents to Traverse City in her junior year of high school from Holland, Michigan. She met Bob Doerr in study hall at Traverse City High School, from which she graduated in 1940. After one year at Albion College, she transferred to and graduated from the University of Michigan where she majored in Speech. Mary was a member of Delta Delta Delta sorority. She and Bob were married on September 22, 1945, and following his discharge from the United States Army, they moved to Ann Arbor, where all three of their children were born. During those Ann Arbor years, Mary was an active homemaker - wonderful seamstress/knitter, cook, gardener, avid reader, ardent U of M football and basketball fan, and hostess. She appreciated beauty and instilled in her children a love for art and the wonders of nature. She was the “behind-the-scenes” support for her children’s activities and her husband’s busy career while he served at the University of Michigan, School of Dentistry. Mary was active in the First Presbyterian Church, Tri-Delta Alumni group, a bridge group, the Ann Arbor Women’s City Club and the Ann Arbor Thrift Shop. Mary loved to travel. She and Bob visited many places both in the United States and abroad. For over 25 years they wintered in the Florida Keys. In 1993 they moved permanently back to Traverse City to summer in their home on Long Lake where they entertained family and friends. Mary was active in the Central United Methodist Church where, with support from Bob and many choir friends, she sang in the choir until 2011. A person of great faith and love for her family, Mary was comforted by reading her Bible as she struggled with her declining memory. She took special joy in her family, especially her grandchildren and great-grandchildren. In addition to her parents and husband, Mary was predeceased by her brothers, Robert Coleman Blanchard and William C. Blanchard (Dorothy), and her brother-in-law Dale Doerr. She is survived by her children: Kathleen (Katie) Parker (Bill); Thomas Doerr, (Rita); Diana (Dee) Kehrberg (Mark); grandchildren: Christian Parker; Matthew (Krista) Parker; Jennifer (Russ) Maddin; William Doerr, Lori Ann Doerr; Johnathan Doerr, Samuel Doerr, Sarah (Chris) LaMaster and Andrew Kehrberg; several great-grandchildren; her sister-in-law, Betty Doerr, and her nieces, Margo Copley (Larry) and Beth Blanchard Smith (Felix); and nephews Steven Doerr and Bret Doerr ( Ann). Services for Mary will be held on Saturday, February 28, 2015 at1:00 PM at Central United Methodist Church in Traverse City, with visitation beginning at noon. Private burial will be at Oakwood Cemetery. Arrangements are made through Reynolds Jonkhoff Funeral Home. Please visit their website to leave memories of Mary at www.reynolds-jonkhoff.com. In lieu of flowers, tributes may be made, with gratitude to Hospice of Michigan, 10850 E. Traverse Highway, Suite 1155, Traverse City, MI 49684 (www.hom.org) or to the Alzheimer’s Association, Northwest Michigan Chapter, 921 W. 11th St., Suite 1W, Traverse City, MI 49686. (www.alz.org/donate)

The family of Mary Blanchard Doerr created this Life Tributes page to make it easy to share your memories.