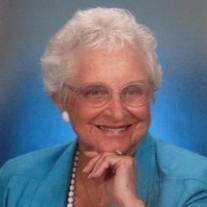 Munising, MI - Mary Ann “Nan” Ferguson, 89, longtime resident of Traverse City, MI passed away early, Sunday, Jan. 20, at her assisted living home in Munising. Nan was born Mary Ann Meyer in New Philadelphia, Ohio, to Charles Russell and Susanna (Taylor) Meyer. Nan attended both Muskingum College (New Concord, OH) and The Ohio State University (Columbus, OH). During WWII Nan joined other women on the home front, working as a chemist. In 1947, her college sweetheart Donald Ferguson returned from his Air Force service, and they were married; a loving union that would last 53 years. By 1952, Nan’s role as a Presbyterian minister’s wife had been determined, as Don completed seminary and they moved to their first pastorate in Chicago, Ill. All together, they served in four communities including East Jordan, MI and Highland Heights, OH, however most of Nan’s adult life was in Traverse City where they spent 18 years with Don as pastor of the Presbyterian Church, and they maintained their home on Long Lake well into retirement. Never one to sit idle, Nan was very involved with church choir and various women’s groups. Professionally, she owned a nursery school in the 1960s and later enjoyed a successful career selling real estate. Once retired, Nan and Don together became Alma College representatives to the Mackinaw Presbytery. Nan and Don also embraced the “Snowbird” life, enjoying winters at Hawthorne at Leesburg (Florida) and summers in their beloved Long Lake home. Nan enjoyed travel, was a voracious reader and loved music. Nan returned fulltime to Traverse City in 2006 and stayed until January 2012, when she moved to Harbor View Assisted Living in Munising, MI. Nan is survived by two children; son Robb (Linda) of Munising and Laurie (Michael) Cirivello of Grand Rapids, MI; her grandsons Eliot Cirivello, Duncan Ferguson, and Zachary Cirivello; her brother, Charles R. Meyer, Jr. of Old Mission, MI.; and sisters-in-law Peggy Ferguson, Nancy Ferguson and Julia McClurg. She also leaves behind nieces, nephews and many fine friends. She was preceded in death by her husband Don, and her parents, Susanna and Charles Meyer. Cremation has taken place. A memorial service is being held this Saturday, May 11th at 1 pm at the Presbyterian Church, when her ashes will be interred in the church’s Memorial Garden. In lieu of flowers, gifts may be sent in Nan’s name to the Presbyterian Church of Traverse City. The family is being served by Reynolds Jonkhoff Funeral Home and Cremation Services. Please visit www.reynolds-jonkhoff.com to share your thoughts and memories with the family. Details of the Memorial event will be shared there as they become available.

The family of Mary Ann Ferguson created this Life Tributes page to make it easy to share your memories.