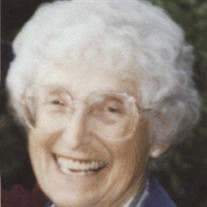 Mary Esther Bauer Hazelton was born September 24, 1923 in Newport News, Virginia to Ralph and Eva Bauer. She passed away peacefully on November 20, 2019 at Boardman Lake Glens, a senior living community, in Traverse City, Michigan at the age of 96. She is preceded in death by her older sister Martha Tavener, and by her husband Paul A. Hazelton, architect, who passed in 2015. She is survived by her three sons: Glenn (Nicole) C. Hazelton, William (Helen) L. Hazelton, and Thomas I. Hazelton; and older sister Phyllis Garn. Mary has seven grandchildren: Nicholas, Stewart, Gabriel, Benjamin, Paul, Katherine, and Natalie - and one great-grandchild, Samuel Hazelton. While growing up, Mary’s family moved from Ann Arbor to Omena, then to Traverse City. Mary was a solid achiever at both Traverse City High School on Seventh Street (now Central Grade School) and Michigan State Normal College in Ypsilanti (now Eastern Michigan University). She was awarded her bachelor of science degree in 1946 in occupational therapy. While working at her father’s architectural business in town, Mary met Paul Hazelton of Petoskey. They were united in marriage on July 31, 1948. Mary devoted herself to raising her family, maintaining her households, and making delicious meals. Her passion for spending time outdoors in all seasons at Deepwater Point in Acme, Hickory Hills, Grand Traverse Yacht Club, the Boardman River, and out on West Bay often in the company of friends on their 22-ton tugboat The Queen Mary. Her hobbies included gardening and weaving on a loom. Her exceptional ability as a seamstress and quilter led to many astounding, intricate, and beautiful bedcovers. Mary also enjoyed playing golf and tennis at the TC Country Club and playing bridge on the weekends with friends. For many years, Mary volunteered to work at Hickory Hills ski events as all three sons became avid and competitive skiers. She took sincere pride in all of her endeavors. She will be remembered around the Slabtown neighborhood having raised the family in a large Victorian home on N. Monroe St. She and Paul were often seen walking and stopping to greet neighbors. In the 1970s they downsized to their retirement home at the end of N. Spruce St. where Mary especially cherished her view of West Bay. A memorial service for Mary will follow in the spring. In lieu of flowers, donations may be made to Interlochen Public Radio. Mary and her family are in the care of the Reynolds-Jonkhoff Funeral Home and Cremation Services. Kindly share a memory at www.reynolds-jonkhoff.com.

The family of Mary Esther Bauer Hazelton created this Life Tributes page to make it easy to share your memories.