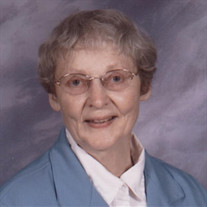 Mary Jane “Janie” Thompson, life-long Leland native, passed away at home on January 28, 2020. She was 85 years old. Janie was born July 17, 1934 to the late Frederick and Lillian (Parker) Roth of Leland. She graduated from Leland Public School in 1953 and went on to earn her Bachelor of Science degree at Michigan State University. Her love for MSU, especially basketball and football, would follow her through the rest of her life. After graduating from MSU, Janie went to work for the Michigan State Highway Department in East Lansing as a record keeper. While living in East Lansing, Janie met the love of her life, Donald H. Thompson, and on May 13, 1961, the couple were married in Leland. In 1968, Don and Janie built a house in Leland where they raised their family and lived the rest of their lives. Janie enjoyed volunteering at her daughter’s school, the American Cancer Society, and being a 4-H leader. She loved listening to jazz and swing, playing bridge, doing jigsaw puzzles, being outside in nature, and working in her garden or the yard. She loved animals, but one thing she didn’t like was snakes. You were sure to hear a scream if one crossed her path. When her daughter got older, Janie worked as a housekeeper for a seasonal family in Leland until she retired. For Janie, family came first. She was a sincere and honest person who always kept her word. If you told her something in confidence, she kept it. She will truly be missed. Janie leaves behind her daughter Janet (Elmer) Bardenhagen; step-son Jeff Thompson; grandchildren Morgan Thompson and Jacob Terry; step-grandchildren Sarah, Jennifer, Jeremy, Matthew and McKenzie, and sister-in-law Janet Roth. Janie was preceded in death by her parents, husband Donald Huston Thompson, step-children Michael and Mark Thompson and Michelle Thompson-Roberts, brother Frederick Roth Jr., son-in-law William Terry Jr., and step daughter-in-law Betty Thompson. Janie’s family would like to express thanks to Ellie and Michelle from hospice who were so kind and compassionate during her illness. A memorial service honoring Janie will be held at 1PM, Saturday, Feb. 8, 2020, at Immanuel Lutheran Church of Leland, with Pastor Joshua LaFeve serving as officiant. Visitation will begin at noon and will continue until the time of service. Memorial contributions may be directed to the Wounded Warrior Project, Shriner’s Hospital, or to a Humane Society of choice. Reynolds-Jonkhoff Funeral Home and Cremation Services is caring for Janie and her family. www.reynolds-jonkhoff.com.

The family of Mary "Janie" Thompson created this Life Tributes page to make it easy to share your memories.