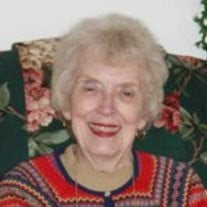 TRAVERSE CITY - Mary Elizabeth (Bette Karmann) Blake, 84, of Traverse City, passed away February 3, 2014 at Cherry Hill Haven in Traverse City. Bette was born May 24, 1929 in Highland Park, MI, the daughter of Thomas and Elizabeth Lynch. Bette graduated from Fordson High school in 1947. She attended Marygrove College, transferred to Michigan State University and graduated with a Bachelors degree in 1951. In 1955 she married Edward J. Karmann, and raised a family in Lansing. In 1975 she graduated from Michigan State with a Masters degree in Library Science, obtained her teaching certificate, and worked at schools in East Lansing and Okemos. She then worked at MSU, running the Math and Science Resource Library, and later was a Academic advisor for several MSU schools, including Package Engineering. In April 2005, Bette married Frank Blake of Elk Rapids, MI. Bette and Frank lived in several locations in the Traverse City area. Bette is survived by her son Ed Karmann, and wife Linda of Alanson MI, and her daughter, Mary Barrett and husband Paul of Traverse City. A memorial services will be held at St. Francis Catholic Church of Traverse City, on February 7, at 1:00 PM with a visitation held one hour prior. In lieu of flowers, memorial contributions can be made in Bette's name to the Alzheimer's Association, 921 W. 11th St., Suite 1W, Traverse City, MI, 49684. Please share your memories of Mary with her family by way of her online guest book at www.reynolds-jonkhoff.com. The family is being served by Reynolds-Jonkhoff Funeral Home and Cremation Services.

The family of Mary E. Karmann-Blake created this Life Tributes page to make it easy to share your memories.