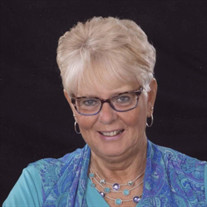 MARY DOROTHEA LARRABEE-POPP, 79, of Traverse City, passed away March 9, 2021 at home with her loving family at her side. Mary was born on February 1, 1942 in Vlaardingen, The Netherlands to Martin and Eszter (Kiss) Smith. She married Loren Larrabee on February 8th, 1964 and later married Raymond Popp on June 6, 2015. Ray and Mary packed many good times and adventures in their years together including cruises, traveling in the U.S. and to Italy and the Vatican. She came to America by boat when she was 14 years old along with her parents and seven siblings and she spoke almost no English. Her youngest brother was born in the U.S. She loved to swim and was a lifeguard when she was young. She graduated from Portage Central High School and from Western Michigan University and played on Western’s varsity field hockey team. Mary began her teaching career in 1972 with St. Francis Catholic School. She was dedicated to the Grand Traverse Area Catholic Schools, teaching at Immaculate Conception Middle School and St. Elizabeth Ann Seton Middle School. She was often the first one in the building in the morning and the last to leave. She filled many roles there including varsity girls basketball coach, middle school athletic director and director of the annual school trips to places like Washington, D.C. She also volunteered for seemingly every function involving the Catholic School system and refereed volleyball for many years. She retired from teaching full time in 2008 but continued to substitute teach at GTACS as recently as 2020. She also worked many summers in the office at Cherryland Electric. She was a busy lady who always had a positive attitude. She liked to knit, sew and crochet and would make blankets, hats, booties and dresses for friends, family and patients at Munson Hospital. Mary spent her winters in retirement at her unit in Palmetto Palms in Ft. Myers, Fl. where she again stepped up to help where needed. She was the Activities Coordinator for many years and helped with the newsletter. There she made many friends with snowbirds from across the U.S. and Canada. She is survived by her husband, Ray. Children, Michael (Angel) Larrabee of Hudson, OH and Alan (Tami) Larrabee of Traverse City. Grandchildren, Steffany of Traverse City, Allen & Joshua Larrabee of Hudson, OH, Benjamin & Aaron Larrabee, Dustin (Ashley) Smith & 3 great grandchildren: Mackenzie, Cayden & Samantha Smith all of Traverse City. Siblings Dr. Harry (Diane) Smith, Esther (Art) Wurfel, Martin (Deb) Smith, Jolly Tenant, Lonnie Lamie and Jake Smith. Ray Popp’s children, Julie (Ron) Reamer, Shirley (Tony) Aboudib, Jennifer (Joe) Kopicki, Ron (Bridget) Popp, Stacey Popp (Blue Moeggenberg), Patrice (Scott) Korson, Stephanie Popp and Dean Popp. Grandchildren Courtney Kipke, Eric and Mercedeh Reamer, Isabelle and Joe Summers, Rachel and Josh Schleenbaker, Nicole, Danielle and Angie Aboudib, Jessica and Joe Ringwood, Jay and Matthew Kopicki, Ben, Spencer (Jenna), Madalyn and Zachary Popp, Luke Popp and Hayley Laird, and Mary Myers. Great grandchildren, Alaiyah, Marissa and Joseph Reamer, Stella and Zoey Ringwood and Anneliese Schleenbaker. Mary was preceded in death by her parents, brother John Smith, sister Alice Ferris and ex-husband Loren. In Mary’s memory, donations can be made to the American Cancer Society, Hospice of Michigan or Grand Traverse Area Catholic Schools. A visitation for family and friends will take place Monday March 15, 2021 from 5-7pm at the Reynolds Jonkhoff Funeral Home. Due to the current restrictions, please be cognizant of your time visiting with the family. A Mass of Christian Burial will take place Tuesday March 16, 2021 at Immaculate Conception Church at 11:00am with visitation one hour prior. Mary and her family are being cared for by the Reynolds Jonkhoff Funeral Home.

MARY DOROTHEA LARRABEE-POPP, 79, of Traverse City, passed away March 9, 2021 at home with her loving family at her side. Mary was born on February 1, 1942 in Vlaardingen, The Netherlands to Martin and Eszter (Kiss) Smith. She married Loren... View Obituary & Service Information

The family of Mary D. Larrabee-Popp created this Life Tributes page to make it easy to share your memories.