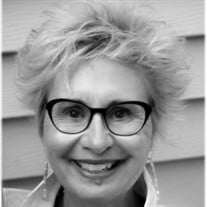 Mary Pierce, mother, grandmother, and friend; educator, volunteer, and traveler; photographer and filmmaker, cyclist and gardener, passed peacefully at her home in Traverse City on October 16, 2021, at the age of 73. Mary was born on May 29, 1948, in Green Bay, Wisconsin, to Frosty and Marion Ferzacca. In 1959, the family moved to Marquette, Michigan, where she spent the remainder of her childhood years. In Marquette, Mary graduated from Bishop Baraga High School and went on to obtain her Master’s Degree in Speech Pathology from Eastern Michigan University. Years later, while still raising her two young children, she attended the University of Michigan where she earned her Doctorate in English Language and Literature. Mary served as a faculty member in the English Departments of several colleges and universities, but she spent most of her career at Northwestern Michigan College. In the classroom, you’d see her kneeling next to students’ desks, coaching them, encouraging them. Mary could get students to do work that nobody else could. She believed her students were her best and most important teachers and saw it her responsibility to not only educate them, but to be present and open to their stories and experiences. In 1999, Mary won the prestigious Imogene Wise teaching award at NMC after being nominated by her students. They called her Mary, and they visited her office regularly for advice on their papers and lives. When with her students, it wouldn’t be long before laughter poured from her office door. Mary was the one you went to when you wanted to feel better. Mary believed volunteer work was the cornerstone of a healthy community, and over the years she gave her time to countless local organizations. Additionally, she served on the Boards of the Traverse City Human Rights Commission, the Montessori Children’s House and Elementary School, and the Grand Traverse Area Catholic Schools. Vibrant. Vivacious. Radiant. Funny. Generous of spirit. Mary sparkled. She glowed. She had “that thing” that can’t be bought or borrowed, that quality that drew people to her, whether checkout clerk or dear friend. Her keen emotional intelligence and warm heart couldn’t help but touch those she encountered. Mary saw beauty everywhere. Inspired by her travels from China to Guatemala, Italy and Mexico, she studied and became an award-winning photographer. She was never without her camera, often stopping in the middle of the road to take pictures, though her favorite subjects were her grandchildren. Mary also wrote, directed, and produced two documentaries, one on immigration, the other on the stigma of mental illness. Her films appeared in festivals in Michigan, New York, and Mexico. Mary loved flowers and was known for her summer baskets and planters. She cherished her time riding her road bike, the wind blowing on her face. She believed dark coffee was a good reason to get out of bed. She loved biscotti, ginger ale, and Cherry Moobilee ice cream. A good night might include popcorn and a documentary or a good book. Mary’s music taste was wide, but nothing compared to Earth, Wind, and Fire, Boz Scaggs, and Steely Dan. Mary is survived by her son, Anthony Quinn (Kori), her daughter, Emily Quinn Nausadis (Matt), and her grandchildren, Harper and Wyatt Nausadis, and McMillan, Crandall, and Addyson Quinn. The father of her children, Tim Quinn, also survives. Mary was preceded in death by her parents and her brother, John Ferzacca. A celebration of Mary’s life will take place at Reynolds-Jonkhoff Funeral Home on Thursday, November 4, 2021 at 11:00 am with visitation beginning at 10:00 am. A memorial luncheon will follow. Mary has asked that this be a time of gratitude and love and has requested that friends and family wear bright, happy colors. Memorial contributions may be directed to Hospice of Michigan or to TART. Tributes can be shared on here on her tribute page.

Mary Pierce, mother, grandmother, and friend; educator, volunteer, and traveler; photographer and filmmaker, cyclist and gardener, passed peacefully at her home in Traverse City on October 16, 2021, at the age of 73. Mary was born on May 29,... View Obituary & Service Information

The family of Mary Sullivan Pierce created this Life Tributes page to make it easy to share your memories.