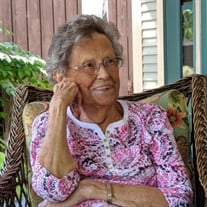 Mary Louise Reich, 99, of Traverse City, passed away peacefully on August 18, 2021 with family by her side. Mary was born on September 21, 1921 in Colebrook, Pennsylvania to the late Harry Moorehead and Mabel Lorraine (Pike) Van Zandt. She spent her early years in PA, graduating from Somerset High School, later attending Indiana State Teachers’ College, and was a secretary in the Department of Labor and Industry at the State Capitol in Harrisburg. On August 8, 1942, she married William Anthony Reich in Harrisburg, PA, and moved to Schenectady, New York as he started his career with the General Electric Company. Over the years, they grew their family and a large network of friends, moving to Huntington Woods, Michigan in 1952. They retired to their beloved home on Glen Lake in Glen Arbor, MI, where they enjoyed many happy days and continued to build wonderful memories. Mary, known as “Tuck” to many friends, was an avid golfer and also enjoyed swimming, sailing, and skiing. She loved traveling and gardening and learned the art of china painting, leaving many beautiful pieces treasured by her family. She had a competitive spirit and was an accomplished Bridge player and enjoyed many fun-filled Dominoes and Mah Jong games in her later years. She was a devoted mother and homemaker and contributed many hours as both a Campfire Girls and Girl Scout leader and Cub Scout den mother. She was an active volunteer with many organizations including local women’s clubs and garden clubs in both Huntington Woods and Glen Arbor, as well as the Glen Lake Yacht Club, schools, and her church. She will be dearly missed by her children Carol (Robert) Brennan of Kailua, HI; Judith Reich of Traverse City, MI; Christopher (Claudia) Reich of Washington, DC and Bettendorf, IA; Amy Shannon of Stayner, Ontario, Canada; Betsy Reich (Tom Kuslits) of Beverly Hills, MI; and Patricia (Joseph) Ambrose of Hydes, MD. Mary and her beloved husband Bill, who passed away in 1993, leave a lasting legacy and cherished memories for a large family including eight grandchildren, 15 great grandchildren and three great, great grandchildren. In addition to her husband Bill, Mary was preceded in death by her parents, one brother, two step-brothers, and two step-sisters. The family will hold a private graveside service and Interment on what would have been her 100th birthday in September, which will take place at St. Philip Neri Cemetery in Empire, MI, where Mary was a devoted parishioner for many years. Her children will honor her wishes by gathering the whole family together at a later date for a memorial and celebration of a life well-lived. Memorial contributions in her honor may be directed to the American Cancer Society or to St. Philip Neri Catholic Church. Please visit www.reynolds-jonkhoff.com to share your memories and condolences with Mary’s family.

Mary Louise Reich, 99, of Traverse City, passed away peacefully on August 18, 2021 with family by her side. Mary was born on September 21, 1921 in Colebrook, Pennsylvania to the late Harry Moorehead and Mabel Lorraine (Pike) Van Zandt. She... View Obituary & Service Information

The family of Mary Louise Reich created this Life Tributes page to make it easy to share your memories.