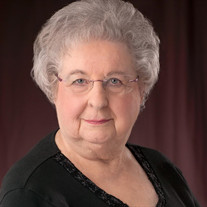 On a perfect sunny Sunday in Traverse City, Mary Helen Williams, known as “The Queen” to family and friends, calmly took her last breath on Aug. 4, 2019. Mary Helen Shaffer was born in Birmingham, Mich., on March 30, 1923, to Mary Elizabeth Shand Shaffer and George Warren Shaffer. She was the youngest of five children. Her siblings (Howard Shaffer, Eleanor Leffel, Dorothy Huffman, George W. Shaffer, Jr.) all preceded her in death. She lived in Lansing and East Lansing during her youth and was a graduate of the new J. W. Sexton High School. She worked for Auto Owners Insurance offices in Lansing, Peoria, Ill., and St. Paul, Minn., and for Liebermann’s, a showplace of contemporary design in downtown Lansing. Mary Helen married Keith Ackerman Williams in Lansing on Aug. 28, 1954, and soon moved to Neahtawanta Point. In 1955, they built a home on North Orchard Drive in Traverse City. In 1966, they moved to State Street and became owners of Grand Traverse Motel. Their two sons, John Robert (Terrie Taylor) and David George (Edward Galindo, Jr.) have been lifelong residents of Traverse City, and they were proud grandparents of Evan (Willa) and Colin Williams. For 10 years, Mary Helen and Keith were members of First Congregational Church. In 1965, they became members of Central United Methodist Church in Traverse City. Known for her cooking and baking skills, one of Mary Helen’s popular desserts was featured in a 1964 Record-Eagle article. She was a fine seamstress who specialized in embroidery, needlepoint, knitting and sewing. She loved good conversation, letter-writing, choral music, antiques, design, pets, nature and Michigan State basketball. Tulips and Leucojum were her favorite cultivated flowers. A good conversationalist, she had the same phone number for 63 years. Until her death at age 96, Mary Helen’s mind was clear, and her memory was remarkable. She read nearly two dozen books this past year and had a great interest in biographies and historical events. Her quick, sarcastic wit was marked by a distinctive high-pitched laugh. She bantered endlessly with the staff at French Manor and teased hospital clinicians, “How many times do I need to tell you my date of birth?” Mary Helen’s family would like to thank the staff at French Manor, Grand Traverse Pavilions and the nurses and doctors at Munson Medical Center for their kind and considerate care. She adored hundreds of friends during her long life, and especially those who gave their time, loyalty and love during the past few years. Her devoted friend Loretta Ludka described Mary Helen as “a wonderful, fun lady.” There will be a celebration of Mary Helen’s life at a later date. Her remains will be interred next to her husband Keith at the Garden of Remembrance at the Congregational Church in Traverse City. Donations in Mary Helen’s memory can be made to Central United Methodist Church or to the Garden of Remembrance at First Congregational Church.

The family of Mary Helen Williams created this Life Tributes page to make it easy to share your memories.