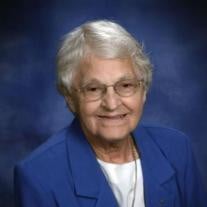 Mary Lou Stuber passed away Saturday Sept, 1, 2012 at Munson Hospital, 82 years, and 2 months, (plus some days) after she was born at Munson Hospital in Traverse City on June 30,1930. Mary Lou was born to Charles and Kathryn (Pold) Miller. She was baptized and confirmed at St. Philip Neri Church in Empire. She grew up on a farm in Port Oneida, Leelanau County with one brother, Charles and two sisters, Anna and Rose. The farm is now part of the Sleeping Bear Dunes National Lakeshore (Park), and is home to the Bayview Trail. The old orchard and barn are all that remains of the farm. Mary Lou attended Glen Arbor High School, where she played basketball and softball, and graduated at the top of her class in 1947. She attended Central Michigan College, where she met, and married Gerald L. Stuber on August 19,1948 in Mt.Pleasant. They moved to the Lansing area, where they raised their family. Mary Lou was employed by Auto-Owners Insurance Company, and retired in 1995. She returned to Traverse City to enjoy her retirement. Mary Lou loved swimming in Lake Michigan, bicycling around town, walking to the farmers market, and all around town. She also loved doing crossword puzzles, sudoku, and sewing. She sewed for the N.G.A., making garments for babies of unwed or underprivileged mothers and also for hospice. She was a member of St Francis Parish, where she was a Lector, served on the Christian Service Committee, was a counting team member and was also well known for the deviled eggs she made for dinners at the church. (Other churches would ask her to make for them, and she obliged) Mary Lou was a stable and driving force within the St. Francis Parish and will be deeply missed. Mary Lou is survived by her children, Gerald (Margaret) of Texas, Mark of Traverse City, Joanne (Ted) Gray of Waterford, Karl of Mackinac Island, Patricia (Matt) Wilson of Downingtown, PA, Eric (Brooke) of Lansing, Barbara Stuber of Haslett, Tyrone (Jodi) of Weidman and Pamela (Tony) Stuber-Coble of Okemos. Also surviving are 5 grandchildren, 1 great grandchild, her brother, Charles and one sister, Rose. She was preceded in death by her parents, sister, Anna and just this past July by her husband of nearly 64 years, Gerald. Visitation for Mary Lou will take place on Tuesday, Sept. 11 from 7 PM until 8:30 PM at The Reynolds-Jonkhoff Funeral Home with the Rosary being prayed at 7:30 PM. The Mass of Christian Burial will take place at 11:00 AM on Wednesday, September 12, 2012 at the St. Francis Catholic Church, with Rev. Kenneth Stachnik and Deacon Rene Hoenscheid officiating. Interment will be in St. Philip Neri Catholic Cemetery in Empire. Mary Lou was a breast cancer survivor in 2000 and was diagnosed with multiple myeloma in 2002. She enjoyed life far longer than any of her Doctor's thought possible. She was a true inspiration to many. Memorial contributions may be directed to Multiple Myeloma Research Foundation, 383 Main Avenue, 5th Floor, Norwalk, CT 06851 or St. Francis Catholic Church Food Pantry, 1025 S. Union St., Traverse City 49684.

Mary Lou Stuber passed away Saturday Sept, 1, 2012 at Munson Hospital, 82 years, and 2 months, (plus some days) after she was born at Munson Hospital in Traverse City on June 30,1930. Mary Lou was born to Charles and Kathryn (Pold) Miller.... View Obituary & Service Information

The family of Mrs. Mary Lou Stuber created this Life Tributes page to make it easy to share your memories.