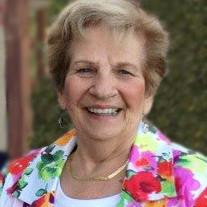 MaryLouise York TRAVERSE CITY – MaryLouise York, age 90, of Traverse City, passed away Tuesday, May 8, 2018 at the Spectrum Health Butterworth Hospital in Grand Rapids. MaryLouise was born October 7, 1927 to Hershel and Faye (Maloney) Hawkins in Detroit. Shortly after MaryLouise was born, the family moved not far from Detroit to Ferndale where she and her brother were raised. MaryLouise graduated from Ferndale High School in 1946 and was known for winning the Detroit News Spelling Bee. During high school, Mary Louise was awarded a full scholarship to the Interlochen Center for the Arts for her gift of singing. MaryLouise continued to sing throughout her entire life, music was her greatest joy. After high school MaryLouise worked as a stenographer, and later on worked for a division of General Motors, Detroit Diesel Allison in salaried personnel. MaryLouise met the love of her life Ellery “Bud” York while he was in the United States Navy and they were married in 1948. Bud was a builder by trade, where together MaryLouise and Bud built their first home in Southfield, second home in Livonia where they raised their two daughters. In retirement MaryLouise and Bud summered at their cottage on Lake Leelanau, and wintered in Florida. Together they were extremely social and active, they loved walking, bicycling, and were always up for an adventure, from traveling all across the country on family vacations, to hang-gliding and boating, they made one great team together. MaryLouise is survived by her daughter, Laurie (Richard Wilkins) York Anderson, Traverse City, grandson, Eric (Lyndsay Arbuckle) Anderson, Traverse City, grandson, Chris (Katie) Burns, Commerce Twp, MI, and great-grandson, Elijah Burns. MaryLouise is also survived by many nieces and nephews. MaryLouise was preceded in death by her parents, husband, Bud, brother, Kenneth Hawkins, and daughter, Linda Burns. A Celebration of Life luncheon will be held on June 23, 2018 at 1:00 pm at The Botanic Garden Visitors Center, at Historic Barns Park, 1490 Red Drive, Traverse City.

The family of MaryLouise York created this Life Tributes page to make it easy to share your memories.