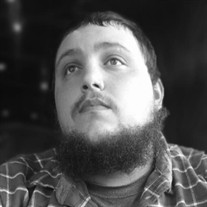 Matthew L. Jakee, 32, of Traverse City, a larger-than-life personality, began his eternal party on December 13, 2020. He left us all to soon, but his legacy will forever live on. Matt, the man that entered as a stranger, but left as a friend was born on July 24, 1988 to Richard Edmond Jakee Jr. and Brenda Kay (Welch) Jakee. He was one of two children, forming an amazing kinship with his brother, Adam as they entered their more adult years. He was the number one supporter to many things. He put family number one, he put his hobbies of hunting and fishing number one, he put his championship rounds of corn hole number one and by self-proclaimed notions he put U of M number one, although his brother disagrees with that one. Matt was the life of the party, or the campground. The annual trips to Turtle Lake for a long weekend or a reunion with family was absolutely in his wheel house. And if none of those offers presented, he would simply hit the golf cart and go make new friends. He had a twinkle in his eye for two special ladies, his beloved bride TeAnna and his beautiful daughter Kaylee. When he married TeAnna on October 24, 2015, he said “I do” to both of those girls and has been a support and a husband and a father with fierceness. Whether it was a rousing game of euchre with his family and friends or the moments he was out in the garden with his grandfather, his larger-than-life personality, love and spirit are always going to be missed. Matthew is survived by his wife TeAnna Marie (Roush) Jakee, Daughter Kaylee Kay Hiltwein, Mother Brenda Kay(Welch) Jakee, Father Richard Edmond Jakee Jr, Brother Adam Allen Jakee(Sara Elissa Zeigler), Grandfather Richard Edmond Jakee, Father-in-law Corey Raymond Roush( Melissa Kay Roush), Sister-in-law Taylor Renea Roush and so many life long friends. Matthew is preceded in death by Kenneth Lee Welch(Ruth Marie (Schaub Welch), Bonnie June(Higgins) Jakee. Visitation will take place Friday December 18, from 5-7pm at the Reynolds Jonkhoff Funeral Home. Due to current restrictions the capacity is limited to 25 at one time in the building. A funeral service will take place Saturday December 19, at 11:00am at Reynolds Jonkhoff Funeral Home for immediate family only. Services will be webcast for livestream viewing at www.rjfh.tv.

Matthew L. Jakee, 32, of Traverse City, a larger-than-life personality, began his eternal party on December 13, 2020. He left us all to soon, but his legacy will forever live on. Matt, the man that entered as a stranger, but left as a friend... View Obituary & Service Information

The family of Matthew Jakee created this Life Tributes page to make it easy to share your memories.