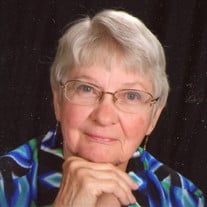 TRAVERSE CITY — Maxine Ann Rideout, 79, of Traverse City, passed away at her home on Sept. 14, 2015. She was born on April 3, 1936 in Zanesville, Ohio, to the late Clarence and Kathryn (Gorby) Boger. Maxine graduated from Bowling Green State University, Ohio, in 1958 with a Bachelor of Science degree in music education and began her teaching career in schools near Toledo, Ohio. Her love of traveling began while teaching in Iran and Pakistan. In 1980 she relocated to the Traverse City area and taught at the Kingsley area schools, where she retired after a teaching span of 36 years. She was devoted to her friends and family and her interests included music, reading, travel, Mah Jong, dogs and gardening. She was an active member of the Presbyterian Church of Traverse City, where she sang in the choir, played hand bells and was a deacon of the church. She participated in NAMI (National Alliance for the Mentally Ill), Safe Harbor, Area Retired School Teachers, Great Lakes Children’s Museum and G.T. County Probate/Family Court Volunteer Services. Maxine is survived by her daughters, Beth Rideout, of Traverse City, and Tracy Burroughs, of Royal Oak; her son, Curtis Rideout, of Interlochen; granddaughters, Aleeah and Alisa Bebermeyer and Sophia Burroughs; her former husband, Raymond Rideout; sister, Sandra Boger, of Columbus, Ohio; and brother, Donald Boger, of Darouth, Massachusetts. A memorial service will be held at 3 p.m. on Friday, Sept. 18, 2015 at the Presbyterian Church of Traverse City, 701 Westminster Road, Traverse City, MI 49686. Memorial contributions in Maxine’s name may be directed to NAMI, 3803 N. Fairfax Drive, Suite 100, Arlington, VA 22203 or the music program at the Presbyterian Church, 701 Westminster, Traverse City, MI 49686. Kindly share your memories with Maxine’s family by way of her online guestbook at www.reynolds-jonkhoff.com. The family is being cared for by the Reynolds-Jonkhoff Funeral Home and Cremation Services.

TRAVERSE CITY &#8212; Maxine Ann Rideout, 79, of Traverse City, passed away at her home on Sept. 14, 2015. She was born on April 3, 1936 in Zanesville, Ohio, to the late Clarence and Kathryn (Gorby) Boger. Maxine graduated from Bowling Green... View Obituary & Service Information

The family of Maxine Ann Rideout created this Life Tributes page to make it easy to share your memories.