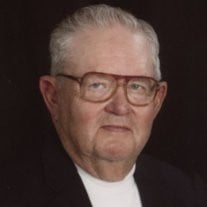 Merle John Wilcox, 84, of Empire passed away June 1 at Munson Medical Center. Merle was born on September 17, 1928 in Roxabell, Ohio to the late Maurice and Edna (Sommers) Wilcox. He married Kay Schulz on June 20, 1953 in Bay City, Michigan. She survives him. He proudly served in the U.S. Army, during the occupation of Germany after World War II. Merle was a master electrician and was the former owner of Glen Lake Electric. He was a member of the Empire United Methodist Church. Merle served as a trustee of the church and for many years, as an usher. Community involvement was very important to Merle. He was a life member of the Masonic Lodge #597, Saladin Shrine, the Lions Club, Cherryland V.F.W. Post 2780, IBEW Union Local 49, Sleeping Bear Noontiders, the DOMC, and volunteered at the Empire Area Museum. Merle loved spending time with his family, walking along Lake Michigan with Kay, and supporting his grandchildren’s activities. Merle enjoyed outdoor activities including hunting, fishing, wildlife and bird watching and gardening. He was passionate about his German Shorthair Pointers hunting over them with friends throughout the Midwest and Canada. Since retiring, he enjoyed spending winters traveling in the south. Merle’s latest hobby was to make walking sticks for his friends. A son and two daughters preceded Merle in death: Michael, Kim, and Jacquelyn Wilcox, also a sister Carol Miller. Surviving are his loving wife Kay, daughter Marilyn Wilcox of Barrington, IL, son, Richard (Stacey) Wilcox of Lake Ann, MI, and three grandchildren: Michael, Taylor and Hana Wilcox. In accordance with Merle’s wishes cremation has taken place. A celebration of Merle’s life will be held at 11:00 a.m. on Friday, June 7, 2013 at the Empire United Methodist Church, 10050 W. Michigan St., Empire. Burial will follow in Maple Grove Cemetery. Friends are welcome to visit with the family on Thursday, June 6, 2013 from 4:00 to 7:00 p.m. at the Reynolds-Jonkhoff Funeral Home or at the church on Friday from 10:00 a.m. until the time of the service. In lieu of flowers, memorial donations can be made to; the Jacky Wilcox Scholarship Fund at Glen Lake High School, Empire United Methodist Church or Shriners Hospitals for Children. Please share your thoughts and memories with Merle’s family at www.reynolds-jonkhoff.com The family is being served by Reynolds-Jonkhoff Funeral Home and Cremation Services.

The family of Merle John Wilcox created this Life Tributes page to make it easy to share your memories.

Merle John Wilcox, 84, of Empire passed away June 1 at Munson...