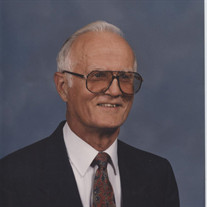 Merwin Hoyt McConnell, age 86, passed peacefully on Thursday, Dec. 25th, 2014. In loving faith, he has now been reunited with his wife of 61 years, Janilyn whom he has missed so much since her passing in 2013. Merwin was born on March 9th, 1928. He excelled in athletics and earned a degree in petroleum engineering from the University of Oklahoma. He joined the Air Force in 1948 and was stationed at Keesler Air Force Base in Biloxi, Mississippi. As Lieutenant Merwin H. McConnell, he married Janilyn S. Webber on July 5th,1952. He worked for Phillips Petroleum for nearly 40 years in Bartlesville, Oklahoma and Odessa, Texas before they moved overseas; first to London, England where he was a vice-president of the company. In 1980 Merwin and Janilyn moved to Stavanger, Norway for 12 years where he served as President and Managing Director of Phillips Petroleum Company Norway until his retirement. Moving back to the U.S., they settled in a home on Torch Lake where friends and family often gathered (Kewadin, near Traverse City, Michigan), and wintered in central Texas. They travelled extensively all over the world. Merwin and Janilyn were always active in the United Methodist Church and most recently were members of Kewadin United Methodist Church where Janilyn served as Deacon and Musical Director. Merwin always enjoyed singing, games of all types and especially outdoor pursuits such as golf, gardening, fishing, camping and boating. Merwin was known as a man of integrity, kindness, generosity and humility. He was deeply committed to his family and will be lovingly remembered by: his children Paul (Heather) McConnell, Richard McConnell, Cheryl (Clive) Gissing and his grandchildren Chad McConnell, Dillon McConnell, Joshua (Clare) Gissing, Christian Gissing and his great-grandchildren Tabitha Gissing and Casper Gissing. He is also survived by his three siblings: Margaret (Jere) Sutton, Janice Gore and John (Carol) McConnell, as well as Janilyn's sister and her husband, Beverly and Ed Moses. Memorial services will be held at a later date. Please feel free to share your memories with Merwin's family at www.reynolds-jonkoff.com The family is being served by Reynolds-Jonkoff Funeral home and Cremation Services. Merwin "Mac" McConnell 1928-2014

Merwin Hoyt McConnell, age 86, passed peacefully on Thursday, Dec. 25th, 2014. In loving faith, he has now been reunited with his wife of 61 years, Janilyn whom he has missed so much since her passing in 2013. Merwin was born on March 9th,... View Obituary & Service Information

The family of Merwin H. McConnell created this Life Tributes page to make it easy to share your memories.