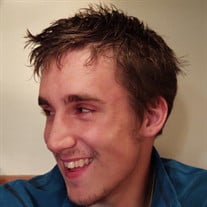 Our brave young man, Michael Eugene Aldrich, died Wednesday, October 6, 2021, at his home in Traverse City. He fought the tough battle in dealing with bi-polar disorder, which can be as deadly as heart disease or cancer, affecting one’s mind and mental outlook. We have chosen honesty in disclosing the cause of Michael’s death in hopes that it may serve as a wake-up call, which could save others affected by mental illness. Michael was born on August 4, 1999, in the Chicago area. He moved to northern Michigan at the age of 5 and graduated from Traverse City Central High School. He enjoyed writing, cooking, catching fish, and composing his own music. In his tragic death, he leaves behind his loving fiancée Lydia Grace O’Hearn and their beautiful one-year old son, Eugene Kaye Aldrich, as well as devoted father David Charles Aldrich and his wife Lynda May Aldrich. Michael is also survived by his three sisters, Elena Katherine Aldrich, Nina Michelle Orzolek and Nicole “Nikki” Marie Thornton, as well as Grandmother Evone Marie Aldrich and his Aldrich family aunts and uncles including Larry, Annette, Gary, Tony, Pat, Sue, Barb, Mark and Johnny. Michael now joins family members who have preceded him in death including his mother Lucille (Cooky) Knight and Grandfather Eugene Herbert Aldrich who have undoubtedly welcomed Michael into the Lord’s Heavenly Kingdom. Michael will be missed dearly, and forever remembered for his beautiful soul, charismatic charm, his amazing wisdom, and intelligence. Funeral arrangements have been made through the Reynolds Jonkhoff Funeral Home for Wednesday, October 13, 2021, with a special Mass for Michael at Immaculate Conception Church 11 a.m. Wednesday morning. If you, or someone you know is suffering from mental illness, don’t lose hope. Mental illness IS treatable. Please contact the National Alliance of Mental Illness in Traverse City for help.

Our brave young man, Michael Eugene Aldrich, died Wednesday, October 6, 2021, at his home in Traverse City. He fought the tough battle in dealing with bi-polar disorder, which can be as deadly as heart disease or cancer, affecting one&#8217;s... View Obituary & Service Information

The family of Michael E. Aldrich created this Life Tributes page to make it easy to share your memories.