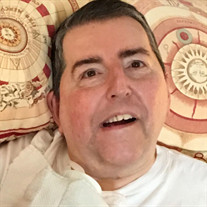 TRAVERSE CITY – Michael J. Dingeman, of Traverse City Michigan, died Sunday, March 17, 2019, at the age of 60, with his loving mother Ruth E. Dingeman and long-time caregiver and friend Brenda Rice by his side. He was born on October 21, 1958, in Heidelberg, Germany. Although Michael lived nearly his entire life challenged by a degenerative neurological disorder, he remarkably kept a positive attitude towards life with a broad smile and a twinkle in his eyes. He chose humor and wit over self-pity and didn’t miss a chance to make others laugh. Mike would always ask visitors to tell him of their latest adventures and listened with great interest. His profound grace inspired and continues to inspire, many to face their adversities with bravery, perseverance, and positivity. Michael had a lifelong interest in cars although he could never drive. By the time he graduated from Traverse City Central High School in 1977, his collection of Corgi die-cast cars was over 500; by the time he was 25, it was over 1,000 cars—a challenging endeavor in a pre-internet world. Over his life, he bought and sold thousands of die-cast Corgis and other collectible model cars with other enthusiasts throughout the world. Michael also worked for over ten years at the Northwestern Michigan Council of Governments where he assisted displaced workers to find new employment. Michael frequently traveled to Europe during his lifetime, most often to Germany, where there were many relatives on his mother’s side. Along with his father John H. Dingeman, they searched the German countryside looking for “that one special vintage Mercedes”. Many winters were spent in Florida too, which meant Michael could tour the various car dealerships and dream of driving. When he had a chance to fly in a vintage open-air biplane, he convinced the pilot to make nearly all of the flight upside down over the ocean so he could experience weightlessness. Michael is survived by his mother Ruth E. Dingeman, Grand Rapids, Michigan and Heidelberg, Germany, his brother, Daniel J. Dingeman, Traverse City, Michigan and Key West, Florida; nephews Jack Dingeman, Key West, Florida, Max Dingeman, Traverse City, Michigan niece Hope Dingeman, Royal Oak, Michigan; his uncle R. Paul Dingeman, St. Clair, Michigan, aunt Ursula Windisch, Heidelberg, Germany; cousins Katie Dingeman Cerda of Los Angles, California, Monica Anderson of Lansing, Michigan, Iska Gans of Heidelberg, Germany, Monica Windisch of Heidelberg, Germany; and his former sister-in-law Denine Dingeman of Traverse City, Michigan. He was predeceased in death by his father, John H. Dingeman. A Memorial Mass of Christian Burial will take place on Friday, April 26, 2019, at 11:00 am at Immaculate Conception Catholic Church with Father James Hayden presiding. In lieu of flowers, Michael wished memorials would be directed to the Carmelite Monastery.

TRAVERSE CITY &#8211; Michael J. Dingeman, of Traverse City Michigan, died Sunday, March 17, 2019, at the age of 60, with his loving mother Ruth E. Dingeman and long-time caregiver and friend Brenda Rice by his side. He was born on October... View Obituary & Service Information

The family of Michael John Dingeman created this Life Tributes page to make it easy to share your memories.