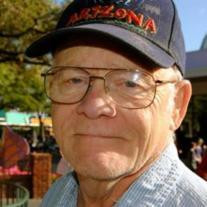 Michael Edward "Mike" Halligan, 70, of Traverse City passed away Saturday, November 10, 2012 at Munson Medical Center in Traverse City. Mike was born on Tuesday, August 11, 1942 to the late John and Frances (Warner) Halligan in Vienna Township, Clio. He married Gloria A. Schriner on Saturday, June 27, 1964 in Mt. Morris. A husband, father and grandfather (papa) was surrounded with love from his family and friends. He was known for his quiet ways with many moments of dry wit. His desire as a young man was to have a family; he and his wife of 48 years had 4 children, Joe, Jack, Jill and John (deceased) and six grandchildren with another granddaughter expected in March. Being born at home, having polio and paralysis at the age of 10, and living often in poor conditions with 6 brothers and sisters, his life's journey was exciting, from being a supervisor in the oil and gas fields and traveling on the job, hunting for 35 years in Wyoming, a fishing trip with his sons to Alaska, and traveling the US with his wife and eventually settling with a second home in Arizona even surprised him. But ultimately it did come down to his family and his faith, and his friends - settling in that they are the most important gifts in life. Having experienced several heart problems, his unexpected death from cancer is devastating to his family. He leaves behind his wife Gloria, children, Joseph (Jennifer) of Rockford, Jack M. (Janette) of Traverse City and Jill (Scott) Gregor of Ada; grandchildren, Madisyn and Clayton Halligan, Hillary Witkop, Ivy and Ella Halligan, Carson and Baby Girl Gregor; his father in law, William Schriner of Mt. Morris; siblings, Margaret (Joe) French, Susan (Reynold) Weiss, Daniel (Cindy) Halligan and Brian (Diane) Halligan; brothers in law Bob Wolfe, Bob VanTol, nieces and nephews. Mike was preceded in death by his son, John, who died in infancy, a granddaughter Taylor Halligan, his parents; his sisters, Mary Ann Wolfe and Judith VanTol. Visitation for friends and family will be held from 2:00 PM until 6:00 PM on Sunday, November 18, 2012 at Reynolds-Jonkhoff Funeral Home with the Rosary being prayed at 5 p.m. The Mass of Christian Burial will take place at 11:00 AM on Monday, November 19, 2012 at Immaculate Conception Catholic Church. Inurnment will be in the Oakwood Catholic Diocesan Columbarium. In lieu of flowers, memorial contributions may be directed to Father Fred Heat Assistance Program or to St. Jude's Childrens Hospital. Please share your memories, thoughts and photos on Mike's tribute wall/guestbook page found at www.reynolds-jonkhoff.com. The family is being served by the Reynolds-Jonkhoff Funeral Home and Cremation Services.

The family of Michael E. Halligan created this Life Tributes page to make it easy to share your memories.