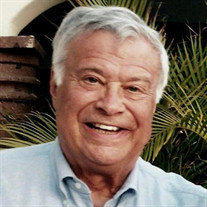 Michael Deleon Lewis (77) passed away on November 3, 2021at his home in Traverse City, Michigan. Mike was born in Traverse City, MI on January 22, 1944 to Jane Lewis. Mike is survived by his wife Beverly Lewis of Traverse City, his daughter Mary Beth (Brad) Forester of Eagan, MN, his daughter-in-law Dana Lewis of Charlottesville, VA, his step-daughters Sarah (Kevin) Hehir of Traverse City, Heather Dunn of Denver, Colorado, Molly Dunn of Traverse City, his daughter-in-law Melanie Auzins of Jenison, MI, and his brother Ken (Pat) Lewis of Fountain, MI. He was the loving grandfather to 6 grandchildren and several nieces and nephews. He is preceded in death by his mother, Jane Lewis, his son,Jason Lewis, and his step-daughter Rebecca Dunn. Mike was a graduate of Traverse City Senior High School in 1962. He played football in high school but was best known for his pranks and shenanigans. His mother was frequently told by teachers that he was “prone to mischief”. Upon graduation, he attended Michigan State University to study political scienceand was a member of the honors college all four years. He graduated from Michigan State University in 1966. He then attended law school at Wayne State University from 1966 through 1969. He graduated with his law degree in June of 1969and was admitted to the State Bar of Michigan in December of 1969. He was admitted to practice law before the US Supreme Court in 1974. Upon graduation from law school, he worked in Lansing for the Michigan State Attorney’s office. In 1972, he relocated to Traverse City where he took over Ormand Danford’s law practice. He managed his own law firm, along with his law partners Ron Schuknecht and Kirsten Keilitz, for the next 40 years. At the end of his career, he joined Smith, Haughey, Rice and Roegge where he continued to practice law. He also had the opportunity to mentor young attorneys, which he found rewarding and truly enjoyed. He was an active member of the Grand Traverse Bar Association for close to 50 years. Mike was a true scholar and a gentleman lawyer. Throughout his career, he championed the constitutional rights of the accused and protected the rights of children and parents. Mike had a soft spot for single mothers, having been raised by a wonderful one. He generously gave his time to serve as a court-appointed criminal defense attorney. In recent years, he volunteered as a domestic relations facilitative mediator at Conflict Resolution Services. He also proudly served on the Brickways Board for several years. Mike was well known for his big smile, quick wit and political discussions. He enjoyed the benefits of living in northern Michigan where he would hunt and fish, as well as enjoy thebeautiful view of the bay. He also enjoyed traveling, gardening, fine food, and was an exceptional cook. His friends and family would frequently enjoy his salad creations and his ability to pair food and fine wine together. He read all the daily newspapers he could find and would do a thorough review of the Michigan Lawyer’s Weekly only after his deep-dive of Spartan magazine. He was best known for his first and true love - his alma mater, Michigan State University. He wore the color green every day and proudly supported all Michigan State athletics. His family believes the Michigan State football team gave him the best parting present a devoted fan could receive last Saturday – an impressive 37-33 win over the Michigan Wolverines. The family would like to thank Jeanie for her caregiving and the staff at Heartland Hospice, especially Jody, for their support during Mike’s final days. In lieu of flowers, the family would like donations to be made to Tunnel to Towers Foundation or Shriners A celebration of life will be held during the Spring of 2022. Kindly share thought and memories with Mike’s family at www.reynolds-jonkhoff.com.

The family of Michael Deleon Lewis created this Life Tributes page to make it easy to share your memories.