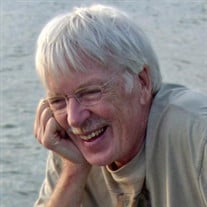 Michael (Mike) Daniel McManus, 81, passed away on Monday, May 18 in the comfort of his Traverse City home, lovingly supported and surrounded by family, and with his dear pileated woodpecker soaring nearby. Mike was born in Philadelphia on November 27, 1938. Growing up, he circled the world by ocean liner with his parents, Michael and Kathryn, and sister, Anne. Mike also loved to attend collegiate and professional basketball games in the city, and he treasured summering on the shore in Ocean City. He attended Saint Joseph’s Preparatory School and Saint Joseph’s University in Philadelphia, and he always had a fondness for his Hawks and the Jesuit education he received. Mike then attended medical school at the University of Pennsylvania and, upon graduation, he moved to Detroit to complete an internship at Henry Ford Hospital. There, Mike met his first wife, Sheri, whom he married in 1965. Afterward, Mike served at the U.S. Public Health Service in Boston, where he loved to eat fresh lobster and sail on the Charles River. He then finished his medical training back in Philadelphia at Wills Eye Hospital, where he specialized in ophthalmology. Mike long dreamed of establishing a medical practice in a small town surrounded by water, with four distinct seasons (some longer than others) and where snow would be abundant-so, in 1970, they arrived in Traverse City. In 1971, their son Matthew died shortly after birth. In 1972, daughter Shea was born; then, in 1975, the twin boys, Cortlan and Stanton. Later, Mike met his second wife, Susan (Sue) Brightheart, whom he married in 1981. They shared thirty-nine years, cultivating beautiful flowers and gardens at their home and a rich life together. They especially enjoyed traveling abroad on cultural excursions or to visit the children; on many years, they also travelled to medically underserved Jamaican communities, where Mike performed surgeries with Sue as his nurse, and the twins helping as much as they could. All the while, and until his passing, Mike found great satisfaction in serving his community, both to further social justice and promote the arts and to help others as a physician. After retiring from the practice of medicine, he pursued a master’s degree in medical ethics, later serving as the Ethical Coordinator at Munson Medical Center to help patients navigate difficult treatment options or end-of-life decisions. Mike was also devoted to his church, Grace Episcopal, where he served on the vestry and was a minister of healing. He was a deeply spiritual person, often visiting Saint Gregory’s Abbey near Three Rivers, where he eventually became an oblate (essentially, a layperson monk). During his life, Mike had many passions, such as playing the piano, weaving on the loom, writing poetry, picking black raspberries for breakfast (if a fresh grapefruit could not be found), and collecting full-bodied red wines for his makeshift cellar. He also loved exploring the beauty of the area while biking on the Leelanau Trail, swimming and sunning at Good Harbor beach, and skiing on the local slopes. He enjoyed spending time with his friends as well, especially at sauna gatherings, playing bridge, and attending the Traverse City Film Festival. Finally, he deeply loved his family and cherished time spent with them, whether over a holiday meal, out on the town with Sue, stacking firewood with the twins, riding a camel with Shea, skiing with them all out in Big Sky, Montana, or playing with his grandchildren. Mike is survived by his wife, Sue, three of his children, Shea (Raja Abillama), Cortlan (Elham Seyedsayamdost) and Stanton, four grandchildren, Kian, Roan, Dara and Kimya, and his sister Anne (Jack McGeough). A memorial service will be held at Grace Episcopal at a later date, with notice to be provided once this is possible. Memorial contributions for a trail bench on the Leelanau Trail can be sent to Reynolds-Jonkhoff Funeral Home.

Michael (Mike) Daniel McManus, 81, passed away on Monday, May 18 in the comfort of his Traverse City home, lovingly supported and surrounded by family, and with his dear pileated woodpecker soaring nearby. Mike was born in Philadelphia on November... View Obituary & Service Information

The family of Michael McManus created this Life Tributes page to make it easy to share your memories.

Michael (Mike) Daniel McManus, 81, passed away on Monday, May...