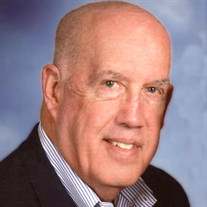 Michael “Mike” Conrad York, 68, of Traverse City passed away unexpectedly of natural causes on Friday, August 11, 2017. Mike was born on July 21, 1949 in Flint, MI to the late Donald and Annamarie (Shippy) York. Mike and Gloria Yvonne Gibson met and fell in love while attending college at Flint University of Michigan. The two were married on December 22, 1970 and together they raised their beautiful daughter Jennifer. Honorably Mike served our country in the United States Airforce. Upon his return from the service he earned his Master’s Degree from Michigan State University in Educational Psychology. Mike and Gloria lived in California for 30 years and eventually moved to Traverse City 81/2 years ago. He worked as a consultant for Estrada Associates LLC, and as a substitute teacher for special needs students with TBA ISD. Mike was very active in his faith. He was a parishioner at St. Patrick Catholic Church, serving as Maintenance Director, a Eucharistic Minister and Lector. He was a member of the Men’s Group, the Secretary for the Pastoral Council, Coordinator for the Old Engine Show, and active with Christ Renews His Parish. In his spare time Mike enjoyed handyman tasks and hiking. He especially liked to hike near the Sleeping Bear Dunes. Most importantly Mike loved his family. He was a devoted husband, father, grandpa, brother and friend that will be deeply missed by all who knew him. Mike is survived by his wife Gloria of almost 47 years; daughter, Jennifer (Brent) Altomare; granddaughter Chloe; siblings, Gail (Jeff) McDonald, Mark (Marilyn) York, Matt (Joanne) York; sister-in-laws, Patsy (Cline) Blount, Faye (Richard) Vanbeenen, Naomi (Dick) Jacot, Laqueta (Gary) Strawn and many other nieces, and nephews. Mass will be held on Saturday, August 19, 2017 at St. Patrick Catholic Church at 11am with a visitation held one hour prior. Fr. Greg McCallum and Deacon Rene Hoenscheid will officiate. In lieu of flowers, donations can be made to the American Heart Association or the St Patrick Catholic Church Food Pantry. Kindly share thoughts and memories with Mike's family at www.reynolds-jonkhoff.com. The family is being cared for by the Reynolds-Jonkhoff Funeral Home.

The family of Michael "Mike" Conrad York created this Life Tributes page to make it easy to share your memories.