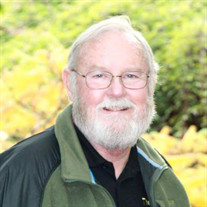 Michael Thomas "Mike" O'Connor, 62, of Traverse City, passed away Saturday, June 3, 2017 at Munson Medical Center. Mike is survived by his wife Sherry; children, Christopher O'Connor, Lesley (William) Suchla, Meaghan O'Connor, Mark Jones, Matthew O'Connor (Erika Stephenson) and Sean O'Connor. Also surviving are his grandchildren, Logan, Dakota and Peyton Suchla; his mother Joan O'Connor and his siblings David (Charlotte) O'Connor, Karen (Thomas) Ross and Kevin O'Connor as well as other extended family. He was preceded in death by his first wife Margaret Ann O'Connor; his father Albert O'Connor and his sister, Kathleen Carroll. Born and raised in Detroit, the son of Albert and Joan (Teeley) O’Connor, he was a lifelong resident of Michigan in spirit. In his early years, Mike was heavily involved with the Church as well as boy scouts. He spent time as an altar boy, and went so far as to convince his father to start a boy scout troop at his church that lacked one, eventually going on to become and Eagle Scout as well as a member of the Order of the Arrow. As a teenager, he attended the University of Detroit high school, and went on to attend Michigan State University, ultimately earning his degree in the education of emotionally impaired children. Although his degree says otherwise, he was always an engineer, spending many years managing plants. He was an exceptional father to his six kids. He always made a point to be involved with their interests and to encourage them to work hard at whatever task is in front of them, no matter the magnitude. He instilled in them his exceptional work ethic. Not only a father, but a lover of dogs, he spent years breeding Brittany Spaniels for show, and eventually settled down with two Brittanys later in life, Brittney and Pearl, who were some of his best friends. An avid biker, he spent many years as a part of the Northern Michigan Harley Owners Group and served as the chapter director for a year. Mike will be deeply missed by his mother, his wife, his brothers, his sister, his children, and his three adored grandsons. The funeral service for Mike will begin at 2 P.M. Monday June 5 at The Reynolds-Jonkhoff Funeral Home with Deacon Rene Hoenscheid officiating. Memorial contributions may be directed to The National Kidney Foundation at www.kidney.org/donate.

The family of Michael Thomas O'Connor created this Life Tributes page to make it easy to share your memories.