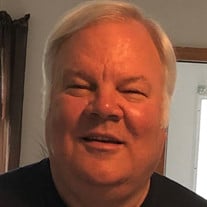 Michael D. Walters, a lifelong Traverse City resident, passed away on Monday, August 10, 2020. Mike was 67. Mike was born in Traverse City on April 25, 1953 to parents Donald L. and Dorothy J. (née Flees) Walters, and graduated from St. Francis High School. On August 31, 1974 he was united in marriage to Pamela K. Nedow in Traverse City. Together, they celebrated 45 years of marriage and their children Michael, Jennifer, and Jill. Mike retired as a machine tool specialist from Sandvik Coromant and as a firefighter and EMT for Elmwood, East Bay, and Blair Townships. Outside of work, he had an extreme passion for snowmobiling and snow and asphalt racing. Further, Mike was accomplished in restoring classic cars, enjoyed driving his Camaro, and fabricating parts on his lathe and mill. Also, he was the guitarist in a band for 40 years and played all over northern Michigan. Mike and Pam were also members of West Side Community Church. He is forever loved by his wife Pamela; son Michael P. (Carrie) Walters, daughters Jennifer (Matthew) Miilu and Jill (Paul) Clemons; six grandchildren: Riley and Allie Walters, William Miilu, Jolynn, Keegan and Tanner Clemons; sisters Elaine (Sayeed) Wahab, Nancy (Brian) Bishop, and Cindy Walters; brothers Daniel (Sue) Walters and Kevin (Shelly) Walters. Son-in-law of Robert and Eleanor Nedow of Sarasota, FL. Also survived by many aunts, uncles, nieces, and nephews. Mike is preceded in death by his parents Don and Dorothy Walters. A Celebration of Life for Mike will take place at 4 p.m. on Saturday, August 15, 2020 in the Gardens of the Reynolds-Jonkhoff Funeral Home; visitation will begin at 3 p.m. Tim Moeggenberg will preside. Please observe current health and safety guidelines. Those wishing to make a donation in Mike’s memory are asked to consider the Elmwood Township Fire and Rescue or the Grand Traverse Area Snowmobile Club. Share a memory of Mike at www.reynolds-jonkhoff.com. Mike and his family are in the care of the Reynolds-Jonkhoff Funeral Home and Cremation Services.

The family of Michael Donald Walters created this Life Tributes page to make it easy to share your memories.