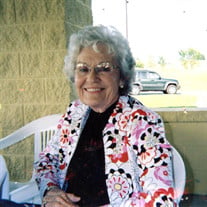 TRAVERSE CITY - Mildred Elizabeth (Ross) Ferguson, “Mimi”, 94, of Traverse City, passed away peacefully on September 16, 2020, at Orchard Creek Assisted Living, holding her daughter’s hand. She was born December 10, 1925, to Robert Roy Ross and Elizabeth Austin Ross, in Fork Shoals, South Carolina-- the first of their 4 children. Mimi’s heart was at home in South Carolina her entire life. She was a graduate of Fordson High School and Henry Ford College, Dearborn, MI, and also attended Pikeville University, Pikeville, KY, and Wayne State University, Detroit. As a Medical Records Librarian, she worked in hospitals in South Carolina and at the Traverse City State Hospital. She also worked in the Dearborn Public Schools and TCAPS. On September 9, 1944, she married Clovis Blake “Toby” Ferguson, in Sioux City, Iowa, while he was on leave from the Army Air Corps 390th Bomb Group. During their lives together, they lived in Dearborn, Traverse City, Kentucky, and South Carolina. They spent many happy hours sharing a thermos of coffee while meandering back mountain roads antiquing. After 58 years of marriage, Mr. Ferguson, a former Dean at Northwestern Michigan College, preceded her in death in September 2002. Mimi was an avid reader all of her life and enjoyed knitting. She was a faithful Hospice volunteer and a member of the Shawl Ministry at the Presbyterian Church after her return to Traverse City in 2005. She was an active member of Lickville Presbyterian Church, Lickville, SC, a church her ancestors helped to establish in the 1800’s. She was a devoted grandmother and great-grandmother. She is survived by her only child, daughter Leslie (Donald) Sibery of Traverse City. She is also survived by her grandchildren, David Sibery, Katherine (William) Daggett, and great-grandchildren, Christian and Charlotte Daggett. Also surviving is her sister, Carolyn Chiasson, brother, Robert Ross, Jr. M.D. (Antoinette), brother-in-law, Marvin Sounart, and a special cousin, Ellen (T.L.) Cotton, as well as a number of nieces and nephews. Mimi was preceded in death by her husband, her infant grandson and granddaughter, her parents, and her youngest sister, Helen Sounart. The family wishes to express heartfelt gratitude to her Orchard Creek Assisted Living family for the devoted and loving care extended to Mimi for the 11 years she was at home there, as well as to Hospice of Michigan for their compassionate care in the final months of her earthly life. A private family memorial service will be held at a future date. In lieu of flowers, memorials may be directed to The Alzheimer’s Association, 921 W. 11th Street #1 W, Traverse City, MI 49684, Northwestern Michigan College Foundation, Great Lakes Culinary Institute Scholarship Fund, 1701 E. Front Street, Traverse City, MI 49686, or Hospice of Michigan, 10850 E. Traverse Highway, STE 1155, Traverse City, MI 49684. The family is being cared for by the Reynolds-Jonkhoff Funeral Home and Cremation Services.

The family of Mildred Ferguson created this Life Tributes page to make it easy to share your memories.