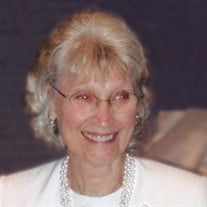 Minnie “Mim” Montante, 87, of Traverse City, passed away Wednesday, January 28, 2015, at the Munson Hospice House. Mim was born on April 22, 1927, in Denbo, PA to the late John and Anna (Racic) Cvetkovic. She married Tony Montante in Detroit on July 26, 1947. Mim and Tony lived first in Riverview, MI and then Oxford, MI. They moved to Traverse City in 1973 to develop and open Jellystone Park campground. Mim graduated from the University of Michigan, earning a Bachelor’s Degree in Nursing. She was a devoted nurse who worked at Milliken Medical Center for many years. She also enjoyed working in her garden and baking. Most importantly, Mim loved her family, especially her grandchildren. She was a wonderful mother, grandmother, and great grandmother who will be deeply missed by all who knew her. Surviving Mim are her daughters; Lauren (Paul) Frayne, Roseann (Daniel) Manville; grandchildren, Michael Frayne, Christopher (Amanda) Frayne, Casey (Fiancé Timothy Elliott) Manville, Caitlyn Manville; great grandson Landon; sister-in-law Barbara Svetkovich and many other loving family members and friends. Mim is preceded in death by her parents, husband of 50 years, Tony, son, Michael, and seven siblings. Visitation for Minnie will take place from 4-7pm on Monday, February 2, 2015, at the Reynolds-Jonkhoff Funeral Home. A Mass of Christian Burial will take place at 11 a.m. on Tuesday, February 3, 2015, at the St. Francis Catholic Church. Burial will take place at the Grand Traverse Memorial Gardens. Memorial contributions may be directed to the Fr. Fred Foundation or Munson Hospice House. Please feel free to sign Mim’s online guestbook at www.reynolds-jonkhoff.com. Arrangements for the family have been entrusted to Reynolds-Jonkhoff Funeral Home.

The family of Minnie "Mim" Montante created this Life Tributes page to make it easy to share your memories.