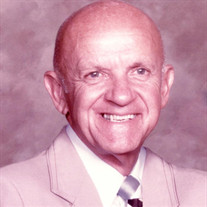 Mitchell “Mike” Zolik, 98, of Traverse City, formerly of Warren, MI passed away Thursday, August 31, 2017 at Orchard Creek Assisted Living. Born on June 24, 1919 in Utica, New York to Polish immigrants Antoni Zolik and Emilia Zolik (Liepiesza). Predeceased by Mary (Gaye) Hohler, his wife of 55 years and his sister Polly Zolik. He graduated from Hamtramck High School and received a degree in Civil Engineering from the University of Michigan. After college he served as a Naval Officer with the Seabees 115th Battalion, Pacific Theater WWII. Upon his honorable discharge from the military, he became the engineer/manager of Detroit/Metro Airport. Later he was named the Deputy Managing Director of the Wayne County Road Commission. He had a strong Christian faith and was active in the Catholic Church and the community. He volunteered at Macomb Hospital in Warren for many years delivering newspapers to the patients. He practiced a healthy lifestyle and for as long as he was able, he walked 3 miles a day. Mike was a long time active member of the Polish Century Club of Detroit and the Michigan Society of Professional Engineers. He was a former Scoutmaster and long time supporter of the Boy Scouts of America. He also was a member of the VFW and the American Legion. Dearest Father of Michael (Catherine), Daniel (Jan), MaryBeth (Terry) Smith. Dearest grandfather of Michael (Sasha), Maureen (Andrew), Alycia(Marty), Nathan (Heather), Tara, Derek, and Cullin. Dearest great-grandfather of Madeline, Joseph, Leo, Cate, Phoebe, Daisy, Sophia, Louis, Ruby, Theodore, Abram, and Adele. A visitation will be held at the Reynolds-Jonkhoff Funeral Home from 6-8pm on Friday, September 8 with a rosary prayed at 7pm. Mass will be held on Saturday September 9, at St. Francis Catholic Church at 11am with a visitation beginning at 10am. Burial will take place at the Lake Ann Cemetery. Memorials may be made to the charity of your choice. Kindly share thoughts and memories with Mike’s family at www.reynolds-jonkhoff.com.

The family of Mitchell "Mike" Zolik created this Life Tributes page to make it easy to share your memories.