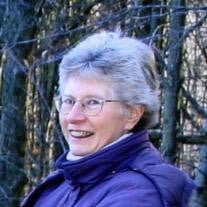 Mollie R. Weeks, 78, former Glen Arbor bookseller and Grand Traverse area community service activist, died May 22 at Munson Hospice House after a long struggle with Alzheimer’s, her family at her side. She founded the Cottage Book Shop in Glen Arbor; helped start the Traverse City-based Women’s Resource Center, the Empire-based Glen Lake Community Library, and the Glen Arbor Township Park Commission; and was on the 1980s executive committee and treasurer of the Child & Family Services in Traverse City, an agency dedicated to “strengthening the fabric of the family.” She also served on the Glen Arbor Township Board of Review. Mollie was born Aug. 19, 1933, in Gaylord, and attended high school there with her brother and two sisters. She then attended and majored in social work at Michigan State University, where she met her future husband in a political science class. Upon graduation from MSU, Mollie was a psychiatric social worker at the Traverse City State Hospital, initially living in the hospital’s staff dormitory before residing on Silver Lake. In 1957 in Gaylord, she married George Weeks of Traverse City. They had two children, Julie and Don, raised in Lansing, the Washington, DC area, and then the family’s beloved Leelanau County. Executive Director Jo Bullis of the Women’s Resource Center said of Mollie’s involvement in the organization: “Mollie Weeks was one of the ‘founding mothers’ of the Women’s Resource Center, serving on the Finance Committee from the WRC’s start in 1975 until the late 1970’s. During the early years, the Finance Committee focused on membership and other fundraising activities in addition to maintaining the financial records. She and other committee members worked diligently to set up a sound financial model for the agency. Mollie continued to support the agency throughout the years, and today, 37 years later, the Women’s Resource Center is firmly rooted in the community, serving over 2,000 women, children and men each year who struggle with domestic and sexual violence. “…Mollie’s daughter, Julie, is continuing her Mom’s tradition and is one of our strong supporters today.” Mollie was a voracious reader of books—especially mysteries—and once was volunteer librarian at the Glen Lake Community Schools, attended by her two children. She was actively involved in establishment of the Glen Lake Community Library in April of 1977, along with several other board members, including the late author-columnist Julia Dickinson, former publisher of the Leelanau Enterprise. According to Librarian Dave Diller, citing board minutes from the time, it was by Mollie’s motion that the library received its name. In their early years, she directed annual used book sales for the Friends of the Library. “If it weren’t for Mollie I don’t think the library would exist today,” said former Glen Arbor Township Supervisor John DePuy, later longtime chief of the Glen Arbor Fire and Rescue Department. “She pushed for state funding.” He cited her efforts to get the library designated as a recipient of some revenue from traffic fines that otherwise would have gone elsewhere. In 1985, Mollie founded the Cottage Book Shop in Glen Arbor, which she sold in 1995 to Barbara Siepker, who operates it today in an historic log cabin on South Lake Street. In pursuit of her passion for the outdoors, Mollie frequently walked and cross-country skied the trails and shorelines of Sleeping Bear Dunes National Lakeshore, within which the family has resided overlooking Lake Michigan. She enjoyed exploring abandoned farmsteads and other historic sites. Mollie was among community women “Walkie Talkies” who could be seen as a brisk-moving cluster, and heard as a discernable buzz, on Glen Arbor area roads and trails. She particularly enjoyed sharing of political/social alliances and lunches with friend Mary Sutherland, going on outings with friends Grace Dickinson and Ann Wettlaufer, and Glen Haven strolls with neighbor Jo Brubaker. The family wishes to thank the caring staff of Munson Hospice House, and Munson Medical Center, the Geriatric Assessment Center, West Front Primary Care, and the EMS crew of the Glen Lake Fire and Rescue Department. Mollie was preceded in death by her son, Donald Jay Weeks, in 2011, her sister, Ann Pester of Cincinnati, Ohio; and her parents, Luella and Ray McKinley of Gaylord. Mollie is survived by her husband of 54 years, George; sister Joyce Spalding of Lansing and Buckley; brother Harry McKinley and sister-in-law Joan McKinley of South Dartmouth, Mass; daughter Julie Weeks and son-in-law Walter Hoegy of Empire; daughter-in-law Joan Weeks of Elk Rapids, and many cousins, nieces and nephews. Cremation has occurred. Visitation will be held at the Reynolds-Jonkhoff Funeral Home, 305 Sixth Street, Traverse City, from 5 p.m. to 7 p.m. on Monday, May 28. A memorial service will be held there at 11 a.m.Tuesday, May 29, with The Rev. Katheryn M. King, Associate Rector of Grace Episcopal Church in Traverse City, presiding. In lieu of lowers, those desiring may make memorial contributions to the Glen Lake Community Library (glenlakelibrary.net) 10115 W. Front, Empire MI 49630, the Women’s Resource Center (womensresourcecenter.org) 7205 Elmwood Ave., Traverse City, MI 49684, or Child & Family Services (cfsnwmi.org) 3785 Veterans Dr., Traverse City, MI 49684. Thoughts may be shared with the family at Mollie’s online guestbook at www.reynolds-jonkhoff.com The family is being served by Reynolds-Jonkhoff Funeral Home and Cremation Services, Traverse City.

Mollie R. Weeks, 78, former Glen Arbor bookseller and Grand Traverse area community service activist, died May 22 at Munson Hospice House after a long struggle with Alzheimer’s, her family at her side. She founded the Cottage Book Shop in... View Obituary & Service Information

The family of Mrs. Mollie R. Weeks created this Life Tributes page to make it easy to share your memories.