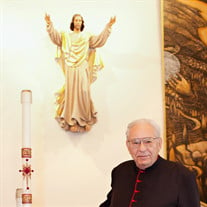 Reverend Monsignor Edwin Anthony Thome entered eternal life on September 24, 2015 at the age of 87. He was born March 2, 1928 in Grand Rapids, Michigan to Joseph, Sr. and Theresa (Ritzenhein) Thome. He received his Bachelor of Arts from Sacred Heart Major Seminary in Detroit, and also took advanced courses in Spanish at the University of Mexico and in behavioral psychology at Notre Dame. He was ordained to the priesthood on June 5, 1954 at St. Andrew Cathedral in Grand Rapids by the Most Reverend Allen J. Babcock. Father Thome began his priestly ministry by serving as Assistant for St. Francis de Sales Parish in Holland and was in charge of the Hispanic Apostolate in the Holland area. On June 23, 1961 he became the Director of Diocesan Missions in the Stanton-Edmore area, and in 1965 became the Pastor for St. Margaret Mary Parish in Edmore with the missions of St. Bernadette of Lourdes in Stanton, and St. Francis de Sales in Lakeview. On July 8, 1969 Father Thome was assigned as Pastor for Immaculate Conception in Traverse City where he served until August 19, 1972 when he was transferred to St. Ann Parish in Cadillac and St. Edward in Harrietta. During his stay in Cadillac he oversaw the construction of the current church on West Thirteenth Street. He was appointed in 1985 to establish a new parish in the Traverse City area and again oversaw the building of the church and the community of Christ the King Parish in Acme, where he remained until retiring to senior priest status on August 13, 2000. During his time there, he was appointed as Vicar General beginning on January 1, 1998 and served in that capacity until September 1, 2001. After retirement he began working with the Father Fred Foundation in Traverse City. From July, 2002 through December, 2014, Msgr. Thome served as Administrator, Sacramental Minister and Pastor for St. Joseph Parish (Mapleton) on Old Mission Peninsula. Other positions he held included Vicar, Director of Priestly Life, Consultor, Director of Priestly Vocations, Superintendent and President of the Grand Traverse Area Catholic Schools, and member of the Presbyteral Council, Finance Council and the Priests’ Retirement Fund Board. On December 23, 2011 Father Thome was named a Prelate of Honor of His Holiness bearing the title of Monsignor. Monsignor Thome is survived by his brothers Father John, Gerard and Raymond. He was preceded in death by his sister Irene and brothers Joseph and Robert. Visitation will be held at St. Joseph Catholic Church on Old Mission Peninsula on Monday, September 28, 2015 from 11 am until 8 pm. The vigil service, led by Father Robert J. Zuchowski, will be held at 7 pm. On Tuesday, September 29, 2015, the Funeral Mass will be held at Immaculate Conception Catholic Church at 11:00 am. Monsignor Francis Murphy will serve as celebrant, along with Father Dennis Stillwell and Monsignor’s brother, Fr. John Thome serving as concelebrants. Monsignor Thome will be interred at St. Joseph Catholic Cemetery at a later date. In lieu of flowers, memorial contributions may be made to Grand Traverse Area Catholic Schools, Father Fred Foundation, or St. Joseph Parish all in Traverse City. Please visit www.reynolds-jonkhoff.com to sign his online guestbook. Arrangements have been entrusted to Reynolds-Jonkhoff Funeral Home. Eternal rest grant unto him, O Lord, and let perpetual light shine upon him; may he and all the souls of the faithful departed, through the mercy of God, rest in peace. Amen.

Reverend Monsignor Edwin Anthony Thome entered eternal life on September 24, 2015 at the age of 87. He was born March 2, 1928 in Grand Rapids, Michigan to Joseph, Sr. and Theresa (Ritzenhein) Thome. He received his Bachelor of Arts from Sacred... View Obituary & Service Information

The family of Monsignor Edwin A. Thome created this Life Tributes page to make it easy to share your memories.