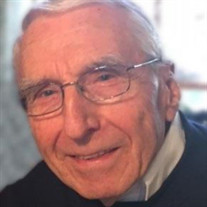 Morris Joseph Kolarik, 92, a lifelong resident of Traverse City, MI, passed away March 1, 2022, at Samaritas in Williamsburg. Morris was born on November 16, 1929, at the family farm in the Bohemian Settlement of Gills Pier in Leelanau County, to the late William Thomas and Mary (Korson) Kolarik. Morris attended the Houdek one-room school house during his early years. He often remarked to his family that he walked up hill both ways to go to school. He graduated from St. Mary's High Lake Leelanu Catholic High School as co-valedictorian in the class of 1948. On September 8, 1951, Morris married his high school sweetheart, Dorothy Therese Lamie, at St Mary's in Lake Leelanau. Together they walked hand-in-hand throughout life, a memory that his family will cherish forever. He honorably served his country in the United States Army at the end of the Korean War and for 18 months in Germany. Morris opened Paesano's Pizza with his children in 1981. He also worked for 28 years as a rural carrier with the United States Postal Service. He and Dorothy were devoted members of Immaculate Conception Church and attended daily mass. He was very involved as a Eucharistic Minister and often volunteered his time to help the church. He was a member of Right to Life and in his free time, he enjoyed woodworking and gardening. Morris and Dorothy loved to travel and made at least 24 trips to Hawaii. Waikiki Beach was his favorite. They also enjoyed travelling overseas to France and Italy. Above all else, Morris cherished the time he spent with his family. He made each of his kids feel like they were his favorite. Morris is survived by his beloved wife of 70 years, Dorothy; children Kathryn (Lawrence) Weber, Morris "Joe" (Laura) Kolarik Jr., Robert (Shellie) Kolarik, Janet (James) Carpenter, Thomas Kolarik, Mary (Alan) Zelinski and Susan (David) Parks; 15 grandchildren, 11 great grandchildren; sisters Agnes McWethy and Jane Beaudry; and brother Jerome (Mary Ann) Kolarik. Morris was preceded in death by his siblings William, Beno, Paul, Veronica, Emma and Rita. Visitation will be held on Sunday, March 6, 2022 from 3 to 5 pm at the Reynolds Jonkhoff Funeral Home. At 3 pm the family will lead a special prayer service where friends can share memories. The Mass of Christian burial will be held on Monday, March 7, 2022, at 11am with visitation beginning one hour prior, at Immaculate Conception Catholic Church. A luncheon will follow in Centennial Hall. Graveside services will take place in the spring at St. Mary's Lake Leelanau, where he will receive military honors. Memorial contributions may be directed for Mass Intentions or to Right to Life.

Morris Joseph Kolarik, 92, a lifelong resident of Traverse City, MI, passed away March 1, 2022, at Samaritas in Williamsburg. Morris was born on November 16, 1929, at the family farm in the Bohemian Settlement of Gills Pier in Leelanau County,... View Obituary & Service Information

The family of Morris Joseph Kolarik created this Life Tributes page to make it easy to share your memories.