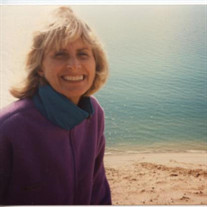 Nancy Ellen Lawrence, 73, of Traverse City passed away peacefully on July 10, 2021 at Cherry Hill Haven with her family by her side. Nancy was born on August 10, 1947 in Flint to the late Donald and Vontella "Bonnie" (Laurent) Lawrence. Nancy graduated from St. Michael's Catholic High School in 1965. She then went on to earn her LPN from Mott Community College and worked for McLaren Hospital. She married Leo James (Jim) Gartland in 1968 and in the early 70’s they, along with their 2 small children, moved to Traverse City where Jim was a commercial loan officer for National Bank and Trust. They enjoyed their time in Traverse City skiing, boating, and raising their children. Later, in the early 80’s she earned her dental assistant degree and worked for many years for Dr. Loren Gardner. Nancy had a passion for books and also worked at the Traverse City District Library for many years. In her free time she enjoyed hiking with her dogs, going to the beach and riding her bike. In the winter months she also enjoyed cross country skiing. She also made frequent trips to visit her beloved grandchildren in south Georgia. Nancy had a strong faith and depended on it often throughout her life. She was a devoted member of St. Michael’s Catholic Church in Flint and St. Francis Catholic Church in Traverse City, where she often volunteered her time. She also volunteered at the former Traverse City Osteopathic Hospital. Nancy is survived by her daughter Kristin (Rick) Carr of Georgia, son Tim (Teri) Gartland of Ohio, son Jeffrey Teague of Traverse City, grandchildren Andrew, Calli, and Drew; as well as many nieces, nephews and cousins. Nancy was preceded in death by her beloved husband Leo James "Jim" Gartland, her parents, and siblings Ann, Kay, David, and niece Maria. Nancy will be laid to rest at the New Calvary Cemetery in Flint. Date is to be determined and updates can be found on this tribute page in the future. Memorial contributions in her honor may be directed to Hospice of Michigan or Cherry Hill Haven of Traverse City, Michigan.

Nancy Ellen Lawrence, 73, of Traverse City passed away peacefully on July 10, 2021 at Cherry Hill Haven with her family by her side. Nancy was born on August 10, 1947 in Flint to the late Donald and Vontella "Bonnie" (Laurent) Lawrence.... View Obituary & Service Information

The family of Nancy Ellen Lawrence created this Life Tributes page to make it easy to share your memories.