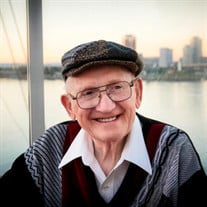 On July 6th, 2020, Neal Francis Breaugh decided that the only place he hadn’t traveled to that he wanted to explore was Heaven. So, at the age of 86, he booked a one-way passage to the celestial city where he is no doubt dancing, telling stories, and trying to figure out how he can pull some strings for the Lions. Neal was born on March 23, 1934 in Detroit. As he grew, he developed a passion for history, learning about different cultures, and travel. During his lifetime, he would journey to places that a child born during the Great Depression could never have imagined, traveling extensively throughout the United States, Canada, Europe, Africa, the Caribbean, the Middle East, and the Far East. Despite all of the exotic locations he toured, some of his favorite trips were taking his children to Civil War battlefields and National Historic Landmarks, exposing them to the hands-on history that he loved so much. Neal’s professional life would also take him on journeys he couldn’t have anticipated. Neal grew up always believing that he would be a priest. However, after graduating from Sacred Heart Seminary in 1956, he felt strongly that there was a different path he was supposed to follow…although he had no idea what it was. Over the course of his life, he worked many different jobs, some of which include: stock boy, copy boy, sports writer, forklift operator, loading dock worker, ad salesman, football and basketball coach, referee, reserve police officer, business owner, activities director, driving instructor, and executive director of two teachers associations. But it was his decision in 1957 to get a teaching certificate, and eventually a Masters Degree from the University of Detroit, that would not only change his life forever, but also the many thousands of students who he would go on to teach in both California and Michigan during his 40 years as an educator. A favorite teacher of so many, up to his final days on earth Neal would encounter former students during grocery store trips, doctor visits, and errands who would go out of their way to catch up with him to tell him how much they loved him as a teacher and what his classes meant to them. These were special moments for Neal. In 1960, Neal married tennis champion June Stack. While their marriage didn’t last forever as they’d hoped, they worked together to raise their four children—Shawn, Todd, Michelle, and Heather —and remained lifelong friends. As it turned out, the great love of Neal’s life was his second wife, Emily. They married in 1977 and with Emily’s daughters —Monica and Cindy—created a large blended family. Neal and Emily were soulmates and he adored her until his last breath. Neal was preceded in death by his parents Francis and Norma Breaugh, and his sister Joanne. Neal leaves behind many who love him including his wife, brother John, sister Kay, 4 children, 2 stepchildren, 9 grandchildren, 12 great grandchildren, many nieces, nephews, and cousins, not to mention all of their spouses, and an abundance of extended family members and friends...all of whom will miss him greatly. As you live your life, Neal would want you to remember the saying that he always had on his answering machine and by which he lived: “Have fun, because life is too short not to enjoy it!” Giving back to the community and helping others were priorities for Neal, as is evidenced by his extensive work with the Knights of Columbus, the Benevolent and Protective Order of Elks, the Ancient Order of Hibernians, and the Sons of the Union Veterans of the Civil War. In lieu of flowers or gifts, memorial donations are requested to be sent to St. Vincent de Paul TC, 1207 Woodmere Ave, Traverse City, MI 49686 or call 231-947-8466 for phone donations. A celebration of Neal’s life and legacy will be held at a future date when the people whose lives he touched can gather together in the same room, enjoying laughter and song, and embrace one another. In the meantime, please share memories of Neal with his family by visiting his Tribute page at https://www.reynolds-jonkhoff.com/obituaries/Neal-Breaugh/. The family is being cared for by the Reynolds-Jonkhoff Funeral Home and Cremation Services.

On July 6th, 2020, Neal Francis Breaugh decided that the only place he hadn&#8217;t traveled to that he wanted to explore was Heaven. So, at the age of 86, he booked a one-way passage to the celestial city where he is no doubt dancing, telling... View Obituary & Service Information

The family of Neal F. Breaugh created this Life Tributes page to make it easy to share your memories.