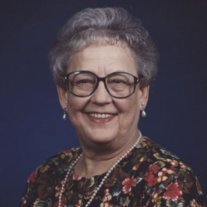 Nellie Joan Heidenberger, 83, of Interlochen passed away Tuesday, December 17, 2013 at her home, surrounded by her loving family. Nellie was born on Wednesday, October 08, 1930 to the late Donald and Neva (Westover) Stuck. She married John Calangelo, Sr on November 7, 1952. He predeceased her. She married Arnold Heidenberger on April 23, 1984, and he also preceded her in death. Attaining the rank of Staff Sergeant, Nellie served our country as a WAC in the U. S. Army during the Korean Conflict.. She also was the Deputy Sheriff of Saginaw County prior to her retirement. When she retired, she moved to the Interlochen area where she was a member of Redeemer Lutheran Church, the Catherine Guild, was a member and past treasurer of the Lutheran Women's Missionary League and was a past member of the American Business and Professional Women's Club. She is survived by her children, Pam (Dale) Nestell of Interlochen, John M. (Debra) Calangelo, Jr. of Saginaw, Christopher Calangelo of Interlochen and Gina Hoy, also of Interlochen. Also surviving are 12 grandchildren, 15 great grandchildren, a brother Norman (Nancy) Stuck of Turner and a sister in law, Patricia Stuck of Zilwaukee, along with many nieces and nephews. Nellie was preceded in death by her parents, son in law Randal L. Hoy, brothers David, James, Glenn, Keith and Herbert and sister Donna Jean LaPan. Visitation for Nellie will take place on Friday, Dec. 20 from 2-4 and 6-8 pm at The Reynolds-Jonkhoff Funeral Home. The funeral service will begin at 1 p.m. Saturday, Dec. 21 at Reynolds-Jonkhoff Funeral Home with visitation taking place one hour prior to the service. Burial will be in Mt. Hope Cemetery in the spring. Memorial contributions may be directed to the Multiple Sclerosis Society, The Kidney Foundation or Hospice of Michigan. Please share your memories of Nellie with her family by way of her online guest book at www.reynolds-jonkhoff.com. The family is being served by Reynolds-Jonkhoff Funeral Home and Cremation Services.

Nellie Joan Heidenberger, 83, of Interlochen passed away Tuesday, December 17, 2013 at her home, surrounded by her loving family. Nellie was born on Wednesday, October 08, 1930 to the late Donald and Neva (Westover) Stuck. She married John... View Obituary & Service Information

The family of Nellie Joan Heidenberger created this Life Tributes page to make it easy to share your memories.