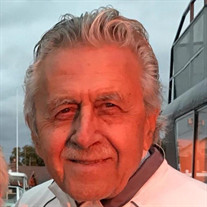 Nick Sica, 88, of Suttons Bay, MI and Venice, FL passed away peacefully on October 13, 2021 at his home surrounded by his loving family. Nick was born on November 25, 1932 to the late James J. and Vivian (Ptaszynski) Sica in Detroit. He spent his high school (Cooley High) and college (Detroit Institute of Technology) years on the basketball court where he became a long-time record-setting player in college for most points scored in a single game! During all his years growing up and in school he worked with his father, the founder of Jimmies Rustics, learning the ropes of the outdoor furniture business. Nick met the love of his life, Helen Joan Ackerman (also of Detroit) during his college years. They shared a love of music and dancing which began their romance and was a constant thread throughout their 66 years together. They could be seen “cutting the rug” in Detroit clubs and just about anywhere in the world that good music could be found. If they were on the dance floor they did not go unnoticed. A handsome couple with a lot of style and spunk! Not long after meeting one another they were married on August 13, 1955. Five children followed as did a life-long career as owner/manager of Jimmies Rustics which grew into a successful multi-store business serving metro Detroit. Though he worked long hours he was always a loving husband and father who took the time to know and participate in his children’s lives. His home was a welcome gathering place for them, their friends and partners. He encouraged and supported their many different personalities and paths in life. In later years, he was a fun and entertaining Grandpa who was adored by all of his grandchildren. In retirement Nick and Helen moved to Northport, MI and spent winters in Venice, Florida. They learned to sail the waters of Lake Michigan with good friends. Nick loved to play guitar and sing and was a member of the Northport Village Voices for many years. As a lifelong learner, he discovered yoga in his 80’s, biking each morning for yoga on Venice beach, rain or shine. Always an open-minded, progressive and caring person Nick became more and more interested in local and world issues. This led him to involvement in discussion groups like Cracker Barrel (Northport) and Great Decisions (Venice). Eventually he found the Veterans for Peace group in Traverse City and there he found his community of fellow activists. Though not a veteran of war, he was a devoted and passionate member of VFP with a particular concern to the issues of gun control, ending all wars, and peace in the world. He was not afraid to take his agenda to the streets and could often be seen walking downtown clad in his Teach Peace attire, carrying signs for Peace. His passionate plea to end violence and wars kept him busy writing notes until the final days of his life. His love, generosity, inspiration and warmth as well as his passion for peace are his legacy and he will be deeply missed by his family and many others. Nick was preceded in death by his parents and sisters, Maryanne Sica and Connie Chila. Nicholas is lovingly remembered by his beloved wife of 66 years, Helen; their children Theresa Sica (George Donovan), James Sica (Michelle), Denise Sica (Gary Ivinskas), Maria Roth (Paul) and Christina Edwards (Chris); grandchildren Jessica, Alexandria, Maria, Sophia, Elena, Chase, Summer and Brooke; great grandchildren Cora & Nico, Charlotte and Effie. A memorial gathering will be held at a later date, most likely in the spring. In lieu of flowers, Nick requested donations be directed to Veterans for Peace Chapter 50. The family welcomes you to share your memories here on this tribute page.

Nick Sica, 88, of Suttons Bay, MI and Venice, FL passed away peacefully on October 13, 2021 at his home surrounded by his loving family. Nick was born on November 25, 1932 to the late James J. and Vivian (Ptaszynski) Sica in Detroit. He spent... View Obituary & Service Information

The family of Nick Sica created this Life Tributes page to make it easy to share your memories.