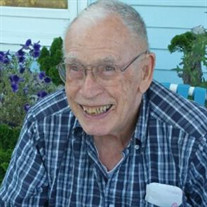 Traverse City - Norman Lester Buchan, 83, of Traverse City passed away peacefully in his chair at his home on September 23, 2017. Norm was born on August 5, 1934 in Traverse City to the late Lester Martin and Florence (Holman) Buchan. He attended Maple Grove School through the eighth grade and worked on the family farm and assorted jobs until he was of age to enlist. He joined the Marines and served during the Korean conflict in Japan and Hawaii from 1954-1957, where he worked in the motor pool. When he returned from the service in 1957, he continued working with his father Lester Buchan, on the family farm raising cherries, blueberries, peaches apples, plums. That winter his friend Frannie Wood introduced Norm to Karen Green, and on July 27,1957, he married the love of his life, Karen L. Green, at St. Joseph Catholic Church on Old Mission Peninsula. With his father and mother, Florence, he continued farming, sharing the large family home that was separated into two halves for his growing family. Norm was a fourth-generation cherry farm. He was a skilled mechanic and could fix almost anything on the farm. He liked tending all of his crops. He farmed from the era of wooden lugs for picking cherries, through the advent of the mechanical shaker and through the end of migrant workers, in later years, employing his children, nieces, nephews and neighborhood children to pull tarps, scoop tank and help with the mechanical harvest. In 1988, he and Karen sold the main farm and moved to the north end of the property where they continued to operate Buchan's Blueberry Hill, which their son and daughter in law, Ben and Lori Buchan operate today. While Norm was passionate about blueberries - he didn't eat them. Norm was a lifetime member of St. Joseph Catholic Church in Old Mission and a member of Farm Bureau. In more recent years he enjoyed reading, completing puzzle books to keep his mind sharp, and riding around on his golf cart with his trusty sidekick, his beloved wiener dog Heidi. When Norm spoke, it was worth listening to. He will be greatly missed for his love, keen sense of humor and warm hugs. Norm is survived by his wife of 60 years, Karen, children Jeffrey (Susan) Buchan, Gregory Buchan, Lavonda Buchan, Benjamin (Lori) Buchan, Roger Buchan; seven grandchildren; six great grandchildren; brother Richard (Jean) Buchan and sisters Rita (Carl) Carpenter, Bernice (Martin) Ghastin and Pauline (Richard) Zoulek. Norm was preceded in death by his sisters Mary Glauch, Patty Toomey, and Margaret Ivanchich; and his grandson William Walter "Billy" Buchan. A memorial mass will be held on Friday, September 29, 2017 at 11:00 am with visitation one hour prior at St. Joseph Catholic Church. Memorial contributions in lieu of flowers may be directed to the Father Fred Foundation or to Hands to Hands Hurricane Relief Efforts. Please visit www.reynolds-jonkhoff.com to share your favorite memories with the family. The family is being cared for by Reynolds Jonkhoff Funeral Home and Cremation Services.

Traverse City - Norman Lester Buchan, 83, of Traverse City passed away peacefully in his chair at his home on September 23, 2017. Norm was born on August 5, 1934 in Traverse City to the late Lester Martin and Florence (Holman) Buchan. He attended... View Obituary & Service Information

The family of Norman Lester Buchan created this Life Tributes page to make it easy to share your memories.