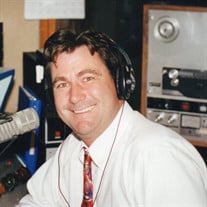 Norman Ross Jones of Traverse City passed away on April 16th at the age of 59. He is survived by his mother Grace, daughter Stephanie, prior wife and longtime friend Missy, former wife Kathy, and grandson Andrew. He is preceded in death by his father, Richard. Norm was born on February 21, 1961 in Traverse City, Michigan to Grace (Ballard) and Richard Jones. While attending Traverse City High School, Stormin’ Norman discovered his love for broadcasting and was an active member of the radio club. After graduation, Norm turned his passion into a career and became a Disc Jockey for WNMC where he met fellow DJ and lifelong friend Jeff Richard. He then went on to make a name for himself under the alias of Scott Brandon at WTLR out of Bradenton, Florida and WCCW in Traverse City. Norm continued spinning records off the air as well for Scott Brandon Productions, which would later become Northern Michigan’s biggest DJ company. Norm continued to work in Northern Michigan radio throughout the 80s under his own name with WKLT and WTCM in Traverse City as well at WJML in Petoskey. In 1986, he began his television career with PM Magazine, a weekly lifestyle show on 29&8. He continued working with the local ABC station into the 2000s, co-hosting Good Morning Northern Michigan, broadcasting street-side coverage of the National Cherry Festival parades, and filming commercials for local businesses as Mr. Consumer. Never happy to keep still, Norm was also a proud owner of three successful, local businesses: Mr. Music Disc Jockey Services, Screen Plus Screen printing, and Premier Flowers. In his spare time, Norm enjoyed volunteering for the Special Olympics, fundraising for local projects such as Kids Kove, was active in his church and youth mentorship, and volunteered with the Traverse City and Grand Traverse County Police Reserves for 20 years. Most importantly, he was a wonderful friend, caring spouse, and loving father. Norm’s life will be celebrated at a later date with friends and family with assistance from the Reynolds-Jonkhoff Funeral Home. Rest easy, Norm Bob. We love you. Share a memory of Norm at www.reynolds-jonkhoff.com.

Norman Ross Jones of Traverse City passed away on April 16th at the age of 59. He is survived by his mother Grace, daughter Stephanie, prior wife and longtime friend Missy, former wife Kathy, and grandson Andrew. He is preceded in death by... View Obituary & Service Information

The family of Norman Ross Jones created this Life Tributes page to make it easy to share your memories.