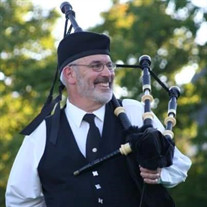 Norman Edward “Ed” Risk TRAVERSE CITY – Norman Edward “Ed” Risk, age 71, passed away on Sunday, March 27, 2016, at his home in the loving care of his family. Ed was born to Norman and Irene (McCutcheon) Risk on July 27, 1944 in Midland, MI. He grew up in Petoskey, MI and graduated from Petoskey High School in 1962. Ed attended Northwestern Michigan College where he met his wife, Carolyn Scott Risk. He graduated with a BS degree (biology-chemistry) from Northern Michigan University in 1968. They married August 3 of that year. In October 1968 Ed and Carolyn joined the United States Peace Corps and served in Botswana, Southern Africa as teachers for 2 years. After returning to the U.S., Ed worked on a research project with the Illinois State Water Survey. In 1974 they returned to Traverse City where Ed worked began a successful career in Research and Development with Dow Chemical. Throughout various organizational changes he remained with the company. He retired from Kennametal in 2008. Ed’s many hobbies include: working as a Master Gardener, bicycle touring, woodworking, ham radio, riding his Triumph motorcycle and playing bagpipes with the Grand Traverse Pipes and Drums. Ed is survived by his wife, Carolyn Scott Risk of Traverse City; son, Norman C. (Liz) Risk of Battle Creek; a granddaughter, Alicia M. Risk of Kalamazoo; sister, Michele (John McCutcheon) Montague of Charlevoix; and a brother, Abe Montague, of Seattle, WA. A graveside service honoring Ed will be held later in the spring. Please feel free to share your thoughts and memories with Ed’s family at www.reynolds-jonkhoff.com. The family is being cared for by the Reynolds-Jonkhoff Funeral Home and Cremation Services.

The family of Norman Edward "Ed" Risk created this Life Tributes page to make it easy to share your memories.