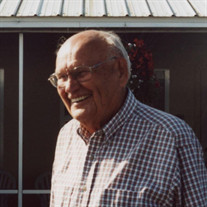 Norman Wyckoff, 96, of Traverse City, passed away May 29, 2021. Norman was born in Detroit on February 15, 1925, son to Norman O. and Violetta (Baldwin) Wyckoff. Norman was a Seaman 1st Class in US Navy, during the heart of WWII. Although he did not talk about his days in the service often, he was proud to have served his country honorably. He was a family man through and through until the end. He was also a loyal employee of the United Sates Postal Service, a career that spanned 35 years, right here in Traverse City. Norman was a man of many interests which included golf, even earning a spot in the Hole in One Club. He was heavily involved with the Traverse Area Model Pilot Society (TRAMPS), and loved flying his numerous model airplanes, which he hand-built and assembled. He loved working on jigsaw puzzles, often giving them to friends who spotted them on his table at home. He was a member of the Elks Club over 60 years. We would be remiss not to mention his status as the “#1 T.C. Trojan Fan,” which was emblazoned on a chair for him. Norman’s kindness came second only to his legendary smile. He leaves behind his daughter Susan (Darrell) Darling; son Charles (Cathie Cline) Wyckoff; grandchildren Anna, Kaye, Ross, Christopher and Justin; great-grandchildren Scout, Nicholas, Tucker, Wylie, James, Maggie, Noah, Sean and Owen; sister Arlene Wyckoff and lifelong friends Robin and Joanne Hart. Norman was preceded in death by his parents; wife of 69 years, Jaqueline; daughter Peg Maxbauer; brothers Arthur, Wayne, Earl and Warren, and sister Sally Fitch. A memorial service honoring Norman’s life will take place Saturday, June 5, 2021, 11AM, at First Congregational Church, Old Mission Peninsula, where Norman was a charter member. Rev. Gary Hogue will officiate. Visitation will begin at 10AM, and continue until the time of service. Please consider memorial contributions to the Memorial Garden at First Congregational Church or to TRAMPS, www.traversemodelpilots.com. Lastly, Norman’s family wishes to extend their gratitude to Brandon, Jennifer and all of the staff at French Manor Terra. Norman and his family are being cared for by Reynolds-Jonkhoff Funeral Home and Cremation Services, www.reynolds-jonkhoff.com

Norman Wyckoff, 96, of Traverse City, passed away May 29, 2021. Norman was born in Detroit on February 15, 1925, son to Norman O. and Violetta (Baldwin) Wyckoff. Norman was a Seaman 1st Class in US Navy, during the heart of WWII. Although he... View Obituary & Service Information

The family of Norman Wyckoff created this Life Tributes page to make it easy to share your memories.