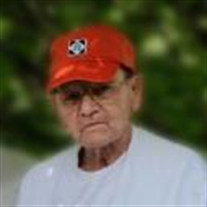 Oscar “Tom” Ford, Jr. passed away peacefully Sunday, August 6 after a lengthy illness. Born September 2, 1931 in Harrisburg, Illinois to Oscar And Amanda (Marvel) Ford. He married Cecilia “Teach” Teachout on Christmas Eve, 1953. Oscar served in the United States Air Force from 1949 to 1969. Upon retirement from the Air Force, he completed a Bachelors degree in Education from Central Michigan University in 1974. After a brief career as a teacher, he was employed by the US Postal Service until his retirement in 1994. He loved his family, his community and his country. Throughout his life, he was an avid sportsman, voracious reader, Tiger fan and lover of white Spirea and Lilacs. He is survived by his three sons David of Empire, Thomas (Christine), of Traverse City and Robert (Marcy) of Elk Rapids and four grandchildren, Erin, Steven, Shannah and Stuart and a great grandson Benjamin. He was preceded in death by his wife in 2015, and a daughter Deborah (Carl) Brewer in 2009 and was also preceded in death by his brother, Noah and sisters, Cora McDermott, Millie Bishop, Naomi Roberts and Wanda Carr. We hope that you can join us for a celebration of the lives of Tom, Teach and Debbie to be held at the Empire Town Hall on September 3rd from 1 to 3 in the afternoon.

The family of Oscar "Tom" Ford Jr. created this Life Tributes page to make it easy to share your memories.