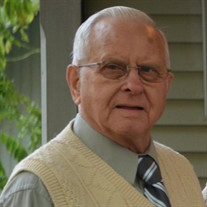 Owen Smith, 91 was called home to his Maker on January 10, 2021. Owen was born to the late Howard and Josephine Smith (Christianson) in Omena, Michigan on April 20, 1929 on one of the two long time standing family farms. As an adventurous boy with a curious mind, and growing up during the great depression, Owen learned quickly to find the value in anything. He found new uses for ordinary things and this parlayed into a love for tools and mechanics. He is fondly remembered by those closest to him as someone who could fix anything. Owen met the love of his life, Alberta, at a roller skating rink as a teenager. He was anything but shy, but the story that was regaled to their kids and grandkids over the years was that he was so frazzled by Alberta that he hid in the bathroom to avoid talking to her until he eventually worked up the courage to ask her to skate with him. Owen and Alberta shared a deep love for each other over the 70 plus years that they were together. They provided a shining example to those around them, not only of their love for each other but also of their love for God through their faithfulness. Owen always kept busy tinkering with projects around the house but his grandkids always remember that he would drop everything when they showed up. They all share memories of him taking them to the airport to watch the airplanes and ride on the escalators or to the bank to see the safety deposit box vault. These simple things seared lasting memories in the minds of his grandchildren. As time progressed & Owen wasn’t so physically able in his later years, he still found ways to bring joy and memories to his great-grandchildren and great-great-grandchildren. It may have been a ride in a wheelbarrow, pushing them on a swing, pulling them in a trailer behind a tractor, playing the harmonica for them, or simply sitting them on his lap and quietly singing a song to them. As a servant of God, Owen made it his life’s mission to care for, nurture and give. He was patient and kind. One of his greatest desires and hopes would be to have all his family members know an individual relationship with the heavenly father, love him, serve him, and one day be together with him in an eternity with God in heaven. Owen is survived by wife Alberta Irene Smith (Quance), sister Ada Florida (Bob) Winnie (Smith) Alvin Smith. Children; Carolyn Fay (Roger) Rice (Smith), Richard Owen (Linda) Smith, Larry Gordon (Dawn) Smith. Grandchildren: Tanya (Ian) McClendon, Roger “Sonny” (Tonya) Rice, Vanja “Susie” (Frank) Simkins, Jennifer (Kevin) Ott, Heather (Josh) Tjader, Jason Smith, Jon (Chelsea) Smith, Sarah (Wes) Anderson, Melissa Smith, Nathan (Kathryn) Smith. Great Grandchildren: Ashley, Timothy, & Michael Montgomery, Korbin Rice, Frank, John, & Emily Simkins, Caden Ott, Aleya Falb, Joslin Tjader, Sven Tjader, Evie Smith. Great-great-grandchildren: Alizabeth Montgomery, AbbiGail Bottomly, Salena Montgomery. He was preceded in death by his parents, Howard and Josephine Smith, brothers, Arnold Howard, Raymond Johnson, and Alvin Smith, and his grandson Daniel Ryan Smith. Visitation will take place Friday January 15, 2020 from 4-7pm at the Reynolds Jonkhoff Funeral Home. Due to current restrictions, we ask that all visitors wear a mask, be cognizant of social distancing and limit your visit time. A funeral service will take place Saturday January 16, 2020 also at the funeral home. Please visit www.rjfh.tv to tune in to the live webcast at 11:00am. Those wishing to honor Owen may wish to consider contributions to the Grand Traverse Pavilions. Owen and his family are being cared for by the Reynolds Jonkhoff Funeral Home.

Owen Smith, 91 was called home to his Maker on January 10, 2021. Owen was born to the late Howard and Josephine Smith (Christianson) in Omena, Michigan on April 20, 1929 on one of the two long time standing family farms. As an adventurous boy... View Obituary & Service Information

The family of Owen A. Smith created this Life Tributes page to make it easy to share your memories.