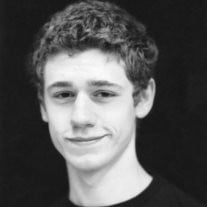 Owen Parker Williamson, 17, of Traverse City passed away unexpectedly on Friday, May 31, 2013. Owen was born on November 26, 1995, in Seattle WA, to his parents, Ann Kathryn Parker and David Owen Williamson. Owen cherished his family and friends. He loved all his theatre, musical friends, mentors, and teachers. He had many deep friendships from Central Grade School, West Middle School and West High School. And as special as all of these friends and family were to Owen, the Most special person in his great and happy life was with his best friend and cherished brother Ross. Ross and Owen had a special bond that only brothers can share. Although school and theatre were important to Owen, he truly loved his friends, family, and especially his brother Ross. Owen will be remembered for his positive attitude, upbeat style and gregarious personality. His love for people and many talents will fondly be remembered in many hearts forever. Owen loved us all very very much. We will keep his bright light burning strong by sharing what he gave us with the world Surviving Owen are his mother and step-father, Ann Kathryn Parker and Thomas Allerton, father David Owen Williamson, brother Ross, grandparents; Wendell and Mary Parker, step-grandmothers; Effie Williamson and Marilynn Quick, aunts and uncles; Ron (Terri) Parker, Dave (Paula) Parker, Mark Williamson, Laura (Robb) Tubbs, Wendy Williamson, Sue (Keith) Waldberger, Hugh (Vicky) Allerton, , Sally (Bob) Griffin; and many cousins and friends. Owen is preceded in death by his grandparents, Perry and Rosemary Williamson and grandfathers Hugh G. Allerton and Charles Quick and cousin Brianne. Visitation for Owen will be held on Wednesday, June 5 from 4-8pm at the Reynolds-Jonkhoff Funeral Home. A funeral service will be held on Thursday, June 6, at the Presbyterian Church, 701 Westminster Ave. in Traverse City at 11am. Memorial contributions may be directed to the Owen P. Williamson Musical Theatre Scholarship Fund. Pure Love.

Owen Parker Williamson, 17, of Traverse City passed away unexpectedly on Friday, May 31, 2013. Owen was born on November 26, 1995, in Seattle WA, to his parents, Ann Kathryn Parker and David Owen Williamson. Owen cherished his family and... View Obituary & Service Information

The family of Owen Parker WIlliamson created this Life Tributes page to make it easy to share your memories.