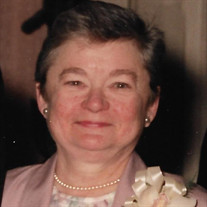 Patricia Anne Farese, 91, formerly of Bernardsville, NJ passed away Saturday, November 3, 2018 at Munson Hospice House. Pat was born in Hazelton, PA on March 17, 1927, daughter of Michael and Anna Mae (Burke) Connor. Young Pat liked to brag that she was the “most Irish” of the family because she was born on St. Patrick’s Day. However, Grandfather Burke reminded her that any true Irishman would have been born on the 16th so as to be present to properly celebrate the day. Blessed with a beautiful singing voice, Pat, as a child, was a featured guest on the local radio station’s weekend variety show and a favorite of her older brothers Jim and Jack who would take Pat Trick-or-Treating as Pat’s singing produced abundant treats from the houses at which the three stopped. Pat graduated from St. Gabriel’s High School in Hazelton and from Millersville State Teachers College, at which she played varsity basketball. As WWII was ongoing, during her summer breaks from college, she worked at a parachute factory. After graduation, Pat moved to Bernardsville, NJ to begin a teaching career that would span 40 years. In Bernardsville, she met Albert Farese, and they married on August 14, 1959. After obtaining her Master’s Degree from Fairleigh Dickenson University in 1972, Pat was influential in helping develop “special education” programs for challenged learners in New Jersey. She also established pre-kindergarten evaluation programs using life-sized Sesame Street characters built by the high school art classes to help shy pre-K children feel comfortable, aiding in the evaluation of their social and motor skills. In retirement Pat cared for Albert, volunteered in the local schools and spent considerable time caring for her three grandchildren. “Grammie” loved taking the grandkids to the local parks and crawling over and through all of the park play sets with them. Spaghetti dinner with Pat’s made-from-scratch sauce on Sundays is a cherished family memory. A deeply faithful Catholic, Pat was an active member at her parishes in NJ. She was a passionate sports fan with extra special devotion to college basketball and to the Notre Dame, Penn State and Green Bay Packers football teams. Pat was also an avid reader of history but especially enjoyed mystery novels. Pat is survived by her son Jim and daughter-in-law Nancy of Suttons Bay, MI and her much-beloved grandchildren Kate, Michael and Ryan. After Albert’s passing in 2009, Pat moved from New Jersey to Northport, MI to be closer to her family and was a frequent and vocal spectator at many of her grandsons’ sporting events. More recently, Pat was pleased to have her granddaughter Kate move close by. Her favorite canine family member, Cooper, provided Pat with much joy in his visits, their shared rides in Jim’s Jeep, and with his enthusiastic displays of affection for Pat. A memorial mass will be held at Our Lady of Perpetual Help in NJ later this spring. Burial next to Albert at Holy Cross Cemetery will follow.

The family of Patricia Anne Farese created this Life Tributes page to make it easy to share your memories.