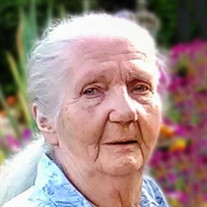 Patricia A. (Stratton) Gauthier, 90, of Traverse City, passed away November 3rd at Grand Traverse Pavilions following a lengthy illness. Born October 5th, 1927, in Alden, Pat was the daughter of Reefy and Ethel (Champney) Stratton. On August 2nd, 1947, she married Gilbert Isadore Gauthier at St. Mary’s Church in Lake Leelanau. Pat will be greatly missed by her children, Dale (Chris), David (Tami), Sharon (Tim) Porter and Michael, all of Traverse City, Richard (Irene) of San Antonio, Texas, Donald, of Interlochen, and Doug (Janet), of Ludington, as well as 24 grandchildren, 30 great grandchildren and 5 great, great grandchildren. Pat was preceded in death by husband Gil, son Daniel, daughter Mary, brothers Orville, Larry, and John, sisters Velma and Doris, 3 grandchildren, 4 great grandchildren and a great, great grandchild. After the last of thousands of diapers were changed and the last child was in school, Pat worked incredibly hard at Essex Wire and then at Burwoods, in Traverse City. Pat was old school all the way. If she gave her opinion on something, you might not have liked it, but you knew it was what she believed. Together, she and Gil taught their children right from wrong, how to be responsible, and how to respect other people and nature. They took their kids on numerous camping adventures around the country. Pat was an animal lover-cats, dogs, horses, and the occasional injured squirrel she would nurse back to health, using bag balm and milk fed from a toy baby bottle. Pat was a den mother when the boys were in cub scouts. She knew and taught the value of hard work, including leading by example-picking cherries with her kids so they could earn their own money. Pat canned thousands of jars of fruits and vegetables over the years, and saved pretty much everything, likely as a result of growing up during the depression. Pat loved music, and played the piano and dulcimer. She and Gil attended numerous fiddlers jams and country and western music festivals. She encouraged her kids to play musical instruments, and went to countless school performances to support their efforts. There were plenty of tough times through Pats life, but she never wavered in her love and support for Gil, or their kids, or their kids kids. She will be missed and loved by them all. Friends and family may visit Friday, November 10th, from 5 to 7 p.m. at Reynolds-Jonkhoff Funeral Home, where a funeral service will be held Saturday, November 11th, at 11 a.m., with visitation beginning at 10 a.m. Burial will follow at Grand Traverse Memorial Gardens. Memorials may be made to Alden 4H, 9357 Lannin Road NW, Alden, MI 49612, OMFA (Original Michigan Fiddlers Assocation), 16810 16 Mile Road, Big Rapids, MI 49307, for scholarships or Music House Museum, 7377 US31 North, Williamsburg, MI 49690 (built on the family homestead property).

The family of Patricia S Gauthier created this Life Tributes page to make it easy to share your memories.