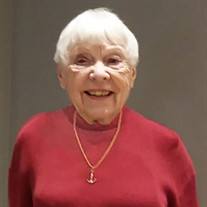 Patricia May Jennings, 93, of Traverse City died on October 15, 2021. She was born in Lansing Michigan on June 18, 1928. She grew up primarily in Lansing, but also lived in Memphis Tennessee, and San Francisco, California where her father's employment took the family. She graduated from Sexton High School in Lansing and went on to Michigan State University where she pursued her interests in drama, broadcast communications, and English literature. She was an accomplished raconteur and told stories that were broadcast on WKAR when she was a student. She was a member of Alpha Chi Omega sorority and cherished her affiliation. At MSU, she met her husband of 64 years, Dean E. Jennings. They settled in East Lansing where they raised their four children. She loved theatre, collected art, volunteered at the Lansing Art Gallery, and enjoyed the symphony. She was an avid reader with a broad curiosity for a variety of topics. She loved to travel with her husband and did so extensively in Europe, exploring historic sites and museums, and in the United States, hiking in the National Parks. She was member of the Mayflower Society and Daughters of the American Revolution, pursuing her interest in heritage and serving as the family historian. Pat was also a member of the Lansing Chapter of the US Power & Sail Squadron where her husband was a past Commander; she served as his "first mate" on many a voyage sailing the Great Lakes and the Virgin Islands. She was a part-time resident of Boyne City where she enjoyed sailing and skiing. She was a devoted parishioner at Edgewood United Church, volunteering in a variety of capacities. In 2018, she relocated to Traverse City where her daughter Susan lovingly served as her “first mate” and advocate. She was an adventurous woman who was dearly loved by her family and friends. She will always be remembered for her kind heart, inquisitive mind, love for nature, and passion for life. She is survived by her children, Pamela, Danford, Patricia, and Sue; grandchildren Simone Smith (Bill) and Melissa Jennings, and great-grandchildren Amara, Logan, and Tristan. Pat is also survived by her brothers Jack and David Lund, and her beloved “sister”-cousin Jennifer Kennedy. She was preceded in death by her husband Dean. A celebration of her life will be held at Edgewood United Church in East Lansing on November 6, 2:00 pm. The family requests that you please wear a mask. The family would like to thank the staff and volunteers of Grand Traverse Pavilions, Munson Hospice, and her additional caretakers, Joanna Lauber and Nancy Groesser who provided her with meaningful companionship which she cherished. Donations may be made in her memory to an environmental organization of your choice.

Patricia May Jennings, 93, of Traverse City died on October 15, 2021. She was born in Lansing Michigan on June 18, 1928. She grew up primarily in Lansing, but also lived in Memphis Tennessee, and San Francisco, California where her father's... View Obituary & Service Information

The family of Patricia "Pat" Jennings created this Life Tributes page to make it easy to share your memories.