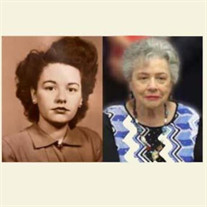 Patricia Niswander (nee Olney) passed away peacefully at Munson Hospice House on Friday, April 29, 2022. She was 88. In the last week of her life, she was surrounded by her loving family and visited by numerous friends and relatives. Patricia was born on January 2, 1934 in Wallin, Michigan, at the home of her parents Leon and Doris Olney (nee McKay). She always joked that no one should forget her birthday: 1-2-34. She was the eldest of five Olney children, and grew up in Honor, Michigan, attending school there. In 1952, Patricia married Edward Mackey, a union which produced her two dear daughters, Lorraine and Pamela. In 1990, she married George Niswander, with whom she shared many wonderful years. She single-handedly cared for George through a long illness until his passing in 2007. Patricia had a lifelong love of music and dancing, instilled in her as a child when her parents took her to the weekly dances in Benzie County. She often said that “music is her joy.” This passion led her to her favorite pastime, tapping her toes and “whirling” to music at the former Perk’s Place of Fife Lake, and during the past several years enjoying the Broad Brothers band at the Hayloft Inn. Every time she attended, the Broad’s would play her favorite song, “Too Many Rivers to Cross,” and dedicate it to her. The last time they played it, Pat listened over the phone, and passed away just minutes later. Patricia had a long list of friends and acquaintances in Traverse City, and loved to stop and chat whenever one happened along. This frequently turned quick shopping trips at Oleson’s and Meijer into afternoon-long marathons. Perhaps her most notable contribution however, was that she provided nutritious meals to literally thousands of children in 30 years as a head cook at Traverse City Public Schools, the majority of which was spent at Willow Hill Elementary School. Many locals remember “Mrs. Mackey,” a fixture in their daily lives in the cafeteria. After retiring from the schools, she worked for Munson Home Health over 10 years, and took care of several people. She of course cooked them delicious meals as well. Her down-home cooking was also legendary among family. She would bring giant trays of potato salad or scalloped potatoes to family functions, and rarely were there any leftovers. Being with family was very important to her. Patricia was preceded in death by her parents, Leon and Doris Olney, brother Leo (Evelyn) Olney, sister Marilyn Olney Stier, and husbands Edward Mackey and George Niswander. She is survived by her brother Donald (Mary) Olney of Beulah, sister Shirley (Arthur) Hanmer of Fort Mohave, AZ, and daughters Lorraine (John) Lattin of Seven Lakes, NC, and Pamela (Steven) Cook of Traverse City. Special survivor recognition is due to her beloved grandson, Cory Steinberg, of Chicago, IL. Patricia doted on Cory from the time he was an infant to the present day. When he moved to Chicago as an adult, she began watching WGN news every night, hoping that he might pass by the camera and she would catch a glimpse of him. The family wishes to express deep gratitude to the following: Karen and Tara of AdvisaCare, and Karen Houle of Glen Eagle for their exceptional kindness. The many doctors, nurses, and aides who provided such wonderful care to Patricia over the years. And finally, to Erin Gray, Heidi, and the entire staff at Munson Hospice House. At her request, no formal visitation or funeral is planned. Patricia will be interred next to her parents in a private family ceremony at Memorial Gardens Cemetery in Traverse City. The family is being served by the Reynolds-Jonkhoff Funeral Home, and friends of Patricia are encouraged to share thoughts and memories in her online guest book: www.reynolds-jonkhoff.com. Please direct memorial contributions to Munson Hospice House, an organization that provides outstanding comfort and care, gently guiding patients and families through the end of life. Make checks payable to Munson Foundation, 1150 Medical Campus Drive, Traverse City Michigan 49684 with this info on the memo line of your check: “Hospice – Memory of Pat Niswander”.

Patricia Niswander (nee Olney) passed away peacefully at Munson Hospice House on Friday, April 29, 2022. She was 88. In the last week of her life, she was surrounded by her loving family and visited by numerous friends and relatives. Patricia... View Obituary & Service Information

The family of Patricia L. Niswander created this Life Tributes page to make it easy to share your memories.