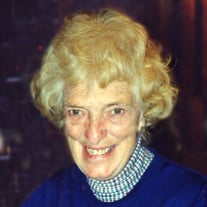 Patricia A. “Pat” Plumley passed away on August 14th, surrounded by her loving family. Born on June 16, 1929, she was the eldest child of Walter and Elizabeth (Gallivan) Miller. Pat’s parents met on North Manitou Island, her mother a school teacher and her father stationed there in the U.S. Coast Guard. The Island always held a special place in her heart. She most recently traveled there in 2015. She was proud of her Leelanau County pioneer stock and was a longtime member of the Manitou Island Memorial Society. Never one to laze about, when she wasn’t spending time with her family or otherwise spoiling her grandchildren she loved traveling, camping, swimming, golf and fun in the sun. Blessed with a “green-thumb”, she could get the stingiest plant to grow. Ever one for a road-trip, even up until her early 80’s she drove a fifth-wheel trailer to Beverly Hills, Florida where she wintered with her late husband Worthy “Dart” Cartsensen. She volunteered at the Father Fred Foundation and the Woman’s Resource Center. She was fond of her Irish heritage too and liked to regale stories of her Grandma Gallivan. A 1947 graduate of St. Francis High School, she was a life-long member of St. Francis Parish. Soon after graduation Pat took a job with Michigan Bell as a switchboard operator. Trading the telephone for the telegram, she soon switched to Western Union. A highlight was working at Tiger Stadium during the 1968 World Series. Subsequently, she was employed by the Traverse City State Hospital and Developmental Regional Center in Muskegon. She retired from the Arnold Ingstrom School 1989. Pat is survived by her two daughters ; Maryellen (Terry) Maddasion of Ocala Fla, and Julie Breithaupt (Richard Carroll), of Traverse City one son Parnell (Wendy) Olson of Grand Rapids, her best friend and loving sister Dorothy “Dodie” King of Dade City , Fla, brother Gerald “Satch” Miller (Jerry) of Ludington ; nieces and nephews Brian Utter (Bernadette), Patrick Utter, Tim King (Bonnie), Colleen Hubert (Mike), Fred Miller (Nancy) of Oxford, MI Jennifer Miller (Dan Ruem)of Ludington and Mark Miller of Jackson, MI grandchildren Michael Maddasion, Jason Maddasion (Holly) Jonathon Breithaupt, Stephanie Breithaupt all of Traverse City and Meagan Swanson (Eric) of Centennial Colorado. Great Grand Children Chrstopher Laforest, Kiely Maddasion, Isabelle Maddasion all of Traverse City and Piper and Riley Swanson of Colorado one great-great grand son Walker Laforest and her loving Chihuahua Daisey . She was preceded in death by her husband Worthy Carstensen, and brothers Freddy Miller and Walter “Red” Miller. Visitation will take place Thursday August 22nd, 2019 from 6-8pm at the Reynolds Jonkhoff Funeral Home. A Rosary recitation will take place at 8pm. A Mass of Christian Burial will take place Friday August 23rd, 2019 at 11:00am at St. Francis Catholic Church with visitation one hour prior. Please visit www.reynolds-jonkhoff.com to share your memories and condolences with the family. Contributions in Pat's honor may be made to the Cherryland Humane Society or the Father Fred Foundation. Pat and her family are being cared for by the Reynolds Jonkhoff Funeral Home and Cremation Services.

Patricia A. &#8220;Pat&#8221; Plumley passed away on August 14th, surrounded by her loving family. Born on June 16, 1929, she was the eldest child of Walter and Elizabeth (Gallivan) Miller. Pat&#8217;s parents met on North Manitou Island,... View Obituary & Service Information

The family of Patricia 'Pat' Plumley created this Life Tributes page to make it easy to share your memories.

Patricia A. “Pat” Plumley passed away on August 14th, surrounded...