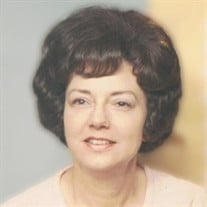 PEACHTREE CITY, Ga. — Patricia Suzanne Wilkerson, 89, of Peachtree City, Georgia, formerly of Traverse City, was called to her Heavenly home on Jan. 1, 2015. She was born on Feb. 17, 1925, in Elkhart, Indiana, to Morton and Augusta (Frank) Main, and grew up in Sturgis until her senior year of high school when her family relocated to Dearborn. She graduated from Dearborn High School in 1942 and lived in Dearborn most of her life. Patricia married Jack T. Wilkerson on May 4, 1946, at the First United Methodist Church of Dearborn, where they would remain members for over 50 years. She and Jack were members of Central United Methodist Church in Traverse City for the years they lived on Old Mission Peninsula. Patricia is survived by her loving daughters, Jacqueline Wilkerson, of Traverse City, and Madeline (Jayme) Cruz, of Peachtree City, Georgia. She is also survived by her beloved granddaughters, Sloane Kelley, of Ponte Vedra Beach, Florida, Erin Monigold, of Traverse City, and Melissa Cruz, of Peachtree City, Georgia; brother, Robert (Belinda) Main, of Taylor; sister-in-law, Elizabeth Main, of South Bend, Indiana; cousin, Alice Henry, of Danville, Illinois; and many special nieces, nephews and other extended family members. Patricia was a patron of the arts, supporting the DIA and the NY Metropolitan Opera for the Detroit area for many years. She and Jack were also longtime supporters of the Henry Ford Museum/Greenfield Village and Colonial Williamsburg. Ahead of her time, Patricia started her own home-based business while staying home with her children, and she was a member of the Zonta Club of Dearborn in the 1950s. She was proud to become a CPS (Certified Professional Secretary) and was very involved in the Detroit PSA chapter. Although Patricia and Jack lived the majority of their married life in Dearborn, they lived in Owensboro, Kentucky, in the early 1960s, where Patricia was secretary to the president of Kentucky Wesleyan College. When the family returned to Dearborn she worked as secretary to the vice president of engineering at Kelsey-Hayes Company until her retirement in 1988. Upon retirement Patricia and Jack became part-time residents of Old Mission Peninsula until 2003 when they moved to Georgia. They were blessed to do a great deal of traveling during this time. Huge University of Michigan fans, they had 50 yard line seats at the Big House for over 40 years and followed the Wolverines to many exciting Bowl games throughout the country. Patricia loved to learn and, after attending night classes at U of M-Dearborn for many years, she earned a BA in history in 1989. She was preceded in death by her loving husband, Jack, in 2003; and siblings, Larry Main, Morton (Faye) Main and Janet (Norman) Charles. Memorial services will be held in the spring in Dearborn with interment next to her beloved husband, Jack, at Memorial Gardens in Owensboro, Kentucky. The family is being served by the Reynolds-Jonkhoff Funeral Home and Cremation Services.

The family of Patricia Suzanne Wilkerson created this Life Tributes page to make it easy to share your memories.