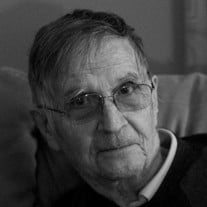 Patrick “Pat” Neil O’Brien, 85, of Traverse City passed away Tuesday morning, January 8, 2019 at home surrounded by his family. Pat was born on February 24, 1933 in Bay City, MI to the late Fred and Edna (MacDonald) O’Brien. Pat graduated in the class of 1952 from TL Handy High School in Bay City. He honorably served our country in the United States Airforce from 1953-1957. He was stationed in Empire, MI and protected the Michigan coastline in the Radar Division. On November 10, 1953 Pat married Carol Lou Powell in the family home in Bay City. Together they raised three wonderful children; Kim, Kevin and Rena. Pat spent his career working for Chevrolet- Bay City Division in various capacities. He worked as a methods engineer, production supervisor and tool and die designer during his 34 year tenure. He was also very active in serving the Bay City community. Most notably, he served on the City Commission in Bay City as a commissioner and president of the commission. He was also a past board member and president of the Big Brothers of Bay City, Saginaw Bay Area and served on the Mental Health Board, Bay County Chapter as well as the board of elders of the First Presbyterian Church in Bay City. In 1988 he and Carol moved to Traverse City where he could walk the Lake Michigan Beaches every day and fish the many lakes in the region. New to the area they became very active in the Newcomers Club, playing bridge, cross country skiing, and playing tennis. He was also once active with the Friends of the Interlochen Public Library. During his lifetime he also enjoyed working with wood, home remodeling, and even built several homes, including a family cottage on beautiful Little Glen Lake. From 2000-2012 Pat and Carol became snowbirds and enjoyed their time in the Villages of Florida. They loved the sunshine, community and social functions in that area. Pat will be missed by his loving wife, children, grandchildren, great grandchildren and friends. He will be fondly remembered for his love of beaches, creative problem solving, willingness to tackle any project, unique “shortcuts” and the love he had for his family. Surviving Pat is his wife Carol of 65 years; children, Kim (Linda McFarlane) O’Brien, Dr. Kevin (Fiancé Connie Buffa) O’Brien, Rena (Tom) Spencer; grandchildren, Jordan McFarlane, Patrick (Wiebke Engel) O’Brien, Dr. Matthew (Dr. Priyanka) O’Brien, Catherine (Steven) Johnson, Maggie O’Brien, Erica (Adam) Dwyer, Scott (Jamie Geer) Spencer, Jonathan Spencer; great grandchildren, Diya O’Brien, Rafael Johnson, Eilley, Rory & Molly Dwyer and Greyson Spencer. Pat is preceded in death by his parents, infant grandson Steven Spencer, his sister Clarice Carlson and daughter-in-law Ann O’Brien. Visitation will be held from 5-8pm on Friday January 11, 2019 at the Reynolds-Jonkhoff Funeral Home. Funeral services will be held at 11am on Saturday, January 12, 2019 with a visitation beginning at 10am at the Presbyterian Church. Kindly share thoughts and memories with Pat’s family at www.reynolds-jonkhoff.com

The family of Patrick Neil O'Brien created this Life Tributes page to make it easy to share your memories.